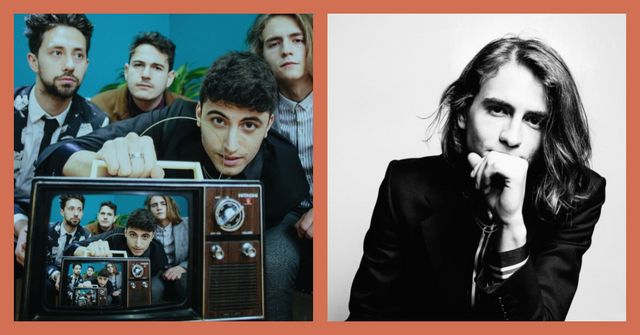 Alternative Indie-Rock band Neon Islands have just been announced as performers at the iconic Isle of Wight festival this year. Trackage Scheme talked to the Maltese member of the band, Jamie Hayes, about his adventure with Neon Islands and what the future holds for this promising band and musician.

So first off, how did this band come about?

We all met while studying at university in the UK. Carlos moved from Spain with Nico and they ended up in student housing with Sam. Carlos posted on the school student page to start a band alongside a list of bands that influenced him. They were all bands that I loved so I reached out, we arranged a rehearsal and he asked Sam if he wanted to join…we’ve been writing together ever since.

In regards to the Isle of Wight festival, what are you most looking forward to experiencing and achieving as a band?

The most exciting thing for us will be the overall atmosphere over the weekend. We’ll be there on all 3 days, networking, partying, performing and catching our favourite acts across all the stages. A lot of preparation is going into this show because we want the set to be memorable for us and the crowd. We really want to be ‘the difference’ on stage and use this opportunity to its fullest potential.

As a Maltese musician living in the UK, do you still feel connected to Malta’s music scene?

I feel connected now more than I ever felt before. Malta is where I fell in love with my craft and I’ve received so much support from the Maltese music community since I left, especially from local heroes such as Nick Morales, Ramona Depares, Mike Bugeja, Sam Christie, Roża, The Velts… the list is endless! Sadly, for original and alternative artists, there is little opportunity for success unless they leave. The UK is where I feel that I truly honed my craft. I’ve had the surreal pleasure to be mentored by some of the industry’s finest here. However, once I reach where I want to be in my career, one of my biggest goals is to actually help expand the Maltese music scene. I keep tabs on the scene and it’s honestly thriving with talent. I believe Malta needs industry professionals that are genuinely invested in developing the scene and the artists.

Any future plans for you as a musician and also for Neon Islands?

2019 has proven itself to be the most exciting year yet, both as a band and a musician. There’s still so much in the pipeline left to announce but we have our next release, ‘WANT’, coupled with a headline release show at The Boileroom in Guildford on June 21st, plus a very exciting tour at the end of the year.