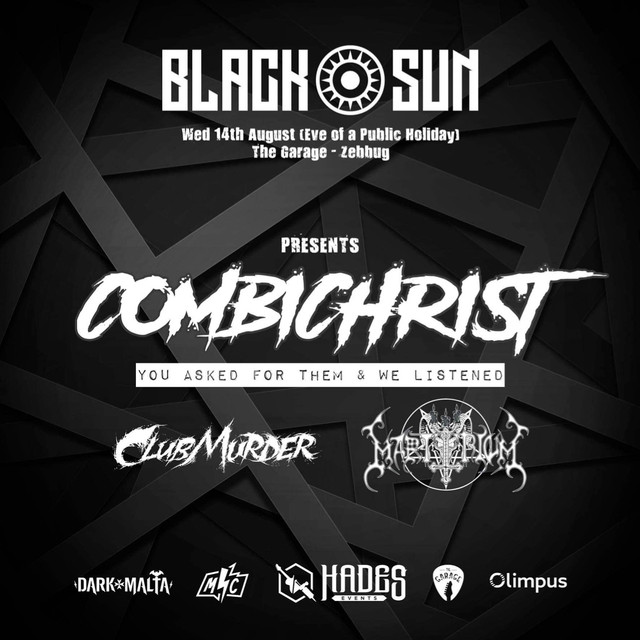 Spearheaded by Rene Farrugia and Sabrina Chircop, Hades Events is proudly hosting American aggrotech-industrial metal band for the first time in Malta. Trackage Scheme caught up with Rene – 1/2 of this dynamic duo – ahead of tomorrow’s highly anticipated gig.

We’re super excited about the Combichrist gig! How did this collaboration come about?

We’ve been trying to book Combichrist for years. When we were communicating with their team regarding an event that we were hoping to host next year, we were asked if we were interested in hosting Combuchrist for their 2019 European tour. Needless to say, we accepted.

What can we expect from this particular event?

A rush of pure adrenaline since it’s Combichrist’s first time performing in Malta.

I’m really looking forward to all of their set, since their performance will include some of their greatest hits and also some tunes from their new album.

Local acts ClubMurder and Martyrium have just been announced as the supporting acts. In your opinion, how important is it for local bands to tour abroad and support other groups if they wish to make a mark on the local and international metal scene?

Both ClubMurder and Martyrium have performed abroad and have garnered a solid fan base. Maltese bands need to perform overseas if they want to witness a bigger and different crowd.

Are there any other similar projects in the pipeline?

After the preparations for this event end, we will focus on The Halloween Massacre 12th edition. We also have another event in the pipeline, which we’ll be announcing very soon. Additionally, we’ve already announced the lineup for Dark Malta 2020.