Berne reflect upon diversity and politics in their evocative new single 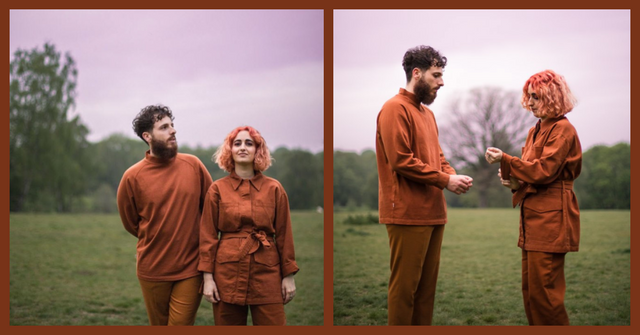 Berne are a London-based alt-pop duo with Maltese roots. The project was initially a brainchild of singer-songwriter Deborah Borg Brincat. However, Berne have recently arisen as a duo after guitarist and producer Gian Pulvirenti was added to the mix. Trackage Scheme caught up with Deborah to discuss their new, emotionally-charged release “Oceans” and the evolution of the duo’s musical career in London.

Initially, Berne was your very own solo project. How did it transform into a duo set-up?

Yes, that’s right! Berne started as a solo project some years back. However, Gian and I had been working and performing together for over a decade, initially with Bletchley Park and then with Berne. Last year, he trained as a sound engineer, and I wanted him to work his magic on some of my songs.

From that point onwards, we started to write songs together. We also developed our live set together, and Gian engineered the recording sessions, produced and mixed the tracks. Re-branding Berne felt like a natural decision because it’s his work as much as it is mine.

Your latest single ‘Oceans’ is super inspiring, and its music video is simply captivating! How did it come about?

Thank you, we’re glad you like it! ‘Oceans’ expresses the struggle to understand why people are threatened by diversity. It criticises societies for only protecting and providing for their own. It is a response to the diplomatic stand-off amongst European leaders over the fate of 32 migrants who were left aboard The Sea Watch 3 for eighteen days in December 2018-January 2019 in Mediterranean waters.

I was closely following this news story over Christmas last year. With every day that passed, I could not believe that this was allowed to happen… that human beings were struggling out there, without basic human needs for so long while politicians were enjoying their Christmas feasts.

Since Oceans is about the beauty of diversity, we wanted to make sure that its message is accessible. We think that music is more than a collection of sounds and the lyrics can go a long way.

We were introduced to British Sign Language performer Tyron Woolfe and discussed our ideas with him. He liked our lyrics, but he made us aware that as most lines are quite abstract, it would be difficult to sign the entire song. We selected the parts that would work best and captioned the song on YouTube. We were blown away by the energy and passion in Tyron’s performance on the day, and we think he did a fantastic job!

You’ve been living in London for quite a while now. How would you describe your experience as a Maltese musician living and working in London?

Yes, it’s been six years! London has really grown on me! I’d say the best part about it is the people that I’ve been lucky enough to connect with. I’m interested in so many things! The insights and experiences of people from all around the world have opened my eyes to many things, and I think that’s pretty special.

For a musician, London’s even better! There are so many opportunities to grow, again, because of its people, not to mention the uncountable venues to perform at and audiences to perform to.

I’ve been involved in lots of exciting projects here; at The Roundhouse, songwriting and collaborating with other artists, conducting children’s choirs, and since mid-2018 as a member of an exclusive artists’ collective called The Rattle, which acts as an incubator for artists to develop their art and their businesses. It has been a key player in the rebirth of Berne.

Do you still feel connected to Malta’s alternative music scene?

We constantly follow what’s going on, and we also listen to the scene’s new releases. We’ve also performed a couple of times at Malta Takes London. Unfortunately, as we do not live in Malta, we cannot attend gigs or collaborate like we used to, but we will definitely have a Maltese date lined up in the future!

Any plans for Berne’s immediate future?

Over the next few weeks, we will continue to push Oceans. We have a few surprises and collaborations in store. In the next couple of months, we will be finalising the release of our second single, as well as recording and producing two other songs. People can find out what we’re up to by following us on social media: https://ffm.to/berne.