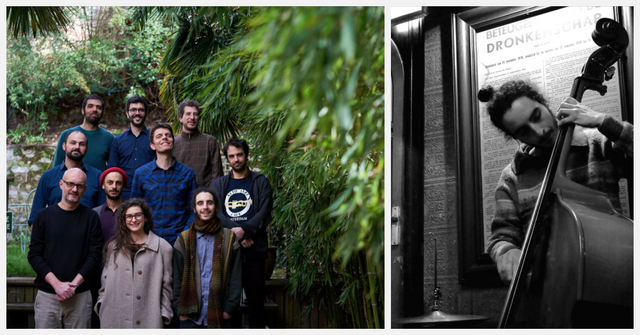 Dean Montanaro is a well-known face in Malta’s music scene. After being involved as a bassist and a session-musician in many local bands, Dean decided to take his musical career to the next level and is currently reading a B.A.in Jazz at the prestigious Codarts University for the Arts in the Netherlands. Trackage Scheme caught up with Dean ahead of the album launch of his latest project ‘Blue Tangerine’.

1. How long have you been involved in music, and more specifically, Malta’s music scene?

I started playing the electric bass at age 10. After a few months on guitar, my teacher at the time introduced me to the instrument. I used to jam with some guys from school as well as writing songs with my brother. Then, when I was 15, I joined a metal band and started jamming and performing with more people. I met Alan Portelli back in 2013, and this meeting inspired me to pursue jazz more than any other genre.

2. Do you still feel connected in the scene, now that you’re pursuing your musical career in the Netherlands?

I guess I don’t get as many calls now as I used to get a couple of years ago, which makes me feel a bit disconnected sometimes. I can’t go to gigs in Malta, and therefore, it’s harder to follow the local live scene – which is something I miss. However, I’m super lucky to have Maltese musician friends with whom I play regularly.

3. How did the project ‘Blue Tangerine’ come about?

‘Blue Tangerine’ was born thanks to the Malta Jazz Festival’s artistic director Sandro Zerafa. Back in 2016, he invited five musicians from Paris to collaborate with four Maltese musicians. After three days full of rehearsals, we performed as a nonet under the name ‘Fringe Youth Jazz Ensemble’. We enjoyed working together so much that we didn’t want the project to end…so, we kept writing and performing in Malta and Paris.

4. What can we expect from the album’s launch in Malta?

Probably a lot of songs from the album 🙂 but also some unreleased compositions. Our music is a stylistic mix, influenced by Brazilian music, West-African rhythms and modern jazz. The pieces are largely Vincent (our pianist) ‘s original compositions and arrangements. Other band members also contribute to the songwriting process. We are launching the album at Offbeat in Valletta – one of Malta’s top venues since it propagates the live music culture.

5. Any other plans in the pipeline?

The group is in the process of signing with a French record label. We’re also planning an album launch in Paris this September. On a personal level, it’s going to be a busy summer. I’m playing with Dominic Galea’s ‘Generation’ at the Malta Jazz Festival. I’m also very much looking forward to performing with the Rotterdam-based project ‘Loek van den Berg Quintet‘ in Malta. It’s going to be super fun – so watch out for that one!