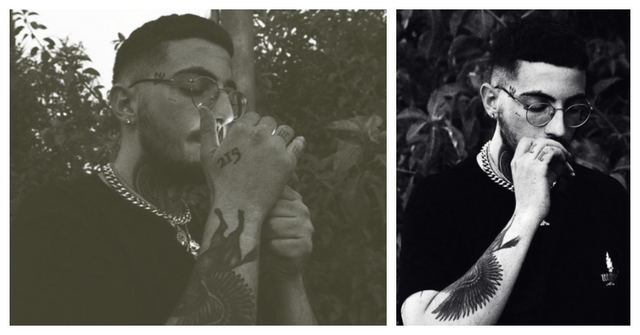 Eddie Fresco burst onto the local scene as part of 215Collective. With a signature look and a rapping style that is rapidly garnering a lot of attention, Eddie Fresco’s musical career is as promising as ever. Trackage Scheme caught up with the young Maltese rapper ahead of his upcoming release entitled INCOGNITO.

Hi Eddie! First off, who inspired you to start rapping?

The person that inspired me to rap was ASAP Rocky with his track ‘Goldie’… At least that’s what my earliest memory of me thinking about actually doing this is. However, I had been listening to hip-hop way before that.

How did the collective nowadays known as 215Collective come about?

The Collective was my idea. I wanted to chase this dream, but I knew that I couldn’t do it on my own. Caro was a school mate of mine and was one of the few people I thought could actually rap and was just as passionate about it as I was.

What would you consider to be the main difference between working as part of the Collective, and working on your solo tunes?

The difference would be the ‘restrictions’…the fact that all members of 215 have a distinctive and different sound. Working together challenges us to fuse these differences into a sound that is distinctively 215. When it works, it’s unique and beautiful.
When I work on my solo projects, there’s a certain kind of freedom when it comes to the musical direction, lyrics and sound.

What would you consider to be the highlight of your career so far?

Definitely INCOGNITO. I would’ve never thought that I would be having Wifisfuneral on my project…or any of the features to be honest. I’ve been so blessed this year, and all the hard work is finally paying off. I just can’t wait!

What can you tell us about your upcoming album ‘Incognito?

INCOGNITO is a project that I’ve been working on for over a year and a half, and I’m so happy that I’m gonna be sharing it with the world after all those sleepless nights trying to perfect it. The project is the polar opposite of my previous one. I hope that listeners can appreciate the growth and effort. I genuinely have a great feeling about this album, and this just might be the one to puts me on the radar.

Any other projects in the pipeline which you’d like to tell us about?

Another EP is already finished and should be released early next year.