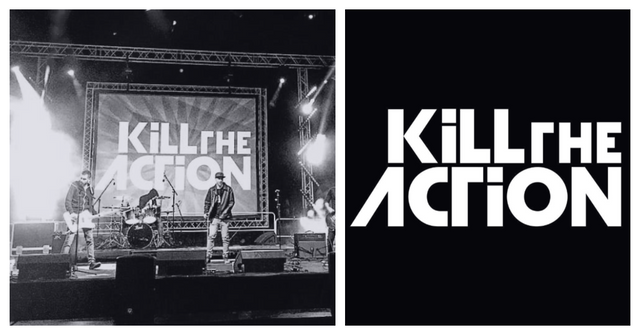 Kill The Action are a band made up of four local musicians who are not afraid to stand out from the crowd and experiment their heart out. Their music is an exciting concoction of electronic elements, rock music and a defiant attitude. The result? A unique, genre-defying sound. Here at Trackage Scheme, we sat down with Kill The Action to discuss their latest single: the adrenaline-rushing summer tune ‘Anti-Gravity’

How did Kill the Action come about?

The band officially started around five years ago. We used to collaborate during our teens and were also fans of each other’s musical projects.

The band’s inception can be traced back to Herman and André’s idea to add an electronic influence to their music. Simon and Mark were then approached to help turn this idea into reality.

How did you guys end up producing electro-rock tunes?

We were very attracted to the world of ‘electronica’ since it provides a lot of opportunities to experiment during the actual writing and production processes.

Over time, the band’s earlier sound acquired an electronic component and vibe. Our upcoming album, ‘Anti Gravity’, has more of an electronic and up-tempo feel to it than our EP ‘For All You People.’

Our songwriting is now more production-based, and less reminiscent of a traditional approach which one would expect from a four-piece ‘electro-rock’ band.

What can you tell us about your latest single ‘Anti-Gravity’?

‘Anti-Gravity’ is the first single off our upcoming ten-track album. The song features a catchy melody and frequent changes in dynamics, driven by an underlying breakbeat.

In regards to the music video, we collaborated with Kenneth from Lung & Spleen, who took care of the concept, filmography and production. We were also after a protagonist who could embody the vibe and attitude which our music portrays – and who better than Leona (from ĠENN)? Simply put, the video is all about the track’s vibe and energy.

As musicians, you’ve been involved in a number of different projects in the past. What’s different about this band?

Without a shadow of a doubt, it’s the fact that our sound is an interplay between the world of electronica and traditional ‘plug and play’ rock. Through trial and error, we have also learnt to focus on and use our strengths and resources as individual musicians.

Any plans in the pipeline

We’ll be launching our ten-track album (‘Anti-Gravity’) in the coming weeks. We’ve also started working on the release of a second single which will bring to the fore another dimension of the band’s sound.

In regards to playing live, we’ll be sharing the stage with other local acts such as Beangrowers, Beesqueeze, BILA, The Ranch and ĠENN at Sajf Lajf Festival on the 14th September.