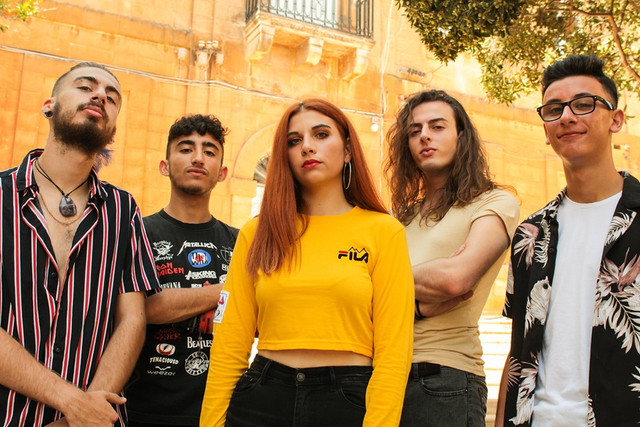 Lighthouse are one of Malta’s youngest rock groups. Inspired by legends such as Led Zeppelin, Red Hot Chili Peppers and Guns n Roses, these five youngsters are determined to cement themselves in Malta’s music scene by serving us hard fast rock inspired by the golden era of rock ‘n’ roll. Trackage Scheme caught up with the band after their performance at the Malta Craft Beer Festival to discuss their humble beginnings and their big dreams.

How did the band come about?

The band is a product of several individuals who managed to find a platform that enables them to express themselves musically. Guitarists Mattei and Shaun have been friends for over seven years. After meeting and jamming with Aaron (bassist), it was clear that there was a unique synergy based on genuine friendship.

Drummer Aless was the first member to be recruited deliberately, and he also helped to turn this vision into reality. Lianne (main vocalist) completes the line-up, fronting the band with her killer vocals and charming personality.

How would you describe your very first performance?

Oh, the memories! It was a small humble barbeque which we had worked our asses off for. We had acoustic guitars going through bass amps, a stage made out of 2 layers of pallets (which we had built ourselves), complicated song arrangements…the whole lot. The audience was made up of friends, family members and beach-goers. Looking back, it feels good to see how far we’ve come, even if we still have a long way to go.

Are there any particular bands in Malta’s music scene that inspire you as musicians and artists?

We’re suckers for a good live set. We look up to bands who can transmit their feelings and emotions to the audience. In our opinion, there are a lot of artists who can do this in Malta…we particularly look up to Matthew James, Red Electrick and Relikc.

What can you tell us about your debut single ‘What Did I Do?’? What have you been up to since the release of that single?

We released ‘What Did I Do?’ at the beginning of the year. It’s a fast-paced, classic rock song with a catchy riff and chorus. So far it has racked up over 4,000 views on Youtube, and over 6,000 streams on Spotify. Not too bad for a debut single!

Since then, we have been gigging non-stop. Gigging has enabled us to meet new people, learn new things, and ultimately become better musicians.

What lies in store for Lighthouse’s immediate future?

We want to write, write and write! We already have a tonne of songs, some of which we have already played live. However, we want to make sure that we hone our craft before we release anything else so that it’ll truly be the best product we can deliver.