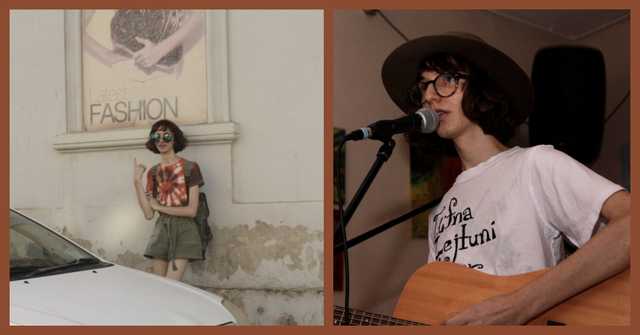 In an age where singer-songwriters in Malta are opting for the glitz and glamour of reality TV shows to get their talent across, Noah Fabri is a rare youngster. He’s a young and captivating artist who’s doing it the ‘old-fashioned’ way: writing reflective songs and honing their craft in an organic manner. Trackage Scheme caught up with Noah, ahead of their album release with the fledgeling collective Karmaġenn.

How would you describe your relationship with music?

Music isn’t something I think about a lot; it’s one of the things I do because it’s been around my upbringing, and it reproduces some of the communities I’m part of, so it’s a medium I’m familiar with expressing myself through.

I guess that certain kinds of music I was exposed to when I was very young sound special to me, in the same way that there’s a certain sense of comfort and certainty in the food I grew up eating. That was like The Beatles, ’60s pop music, jazz, some classical music, and a few nineties singer-songwriters.

But I discovered a lot of music through circumstance, and especially through friends. David Bowie died when I was sixteen and hormonal, so his music became important to me then. And then when I made friends with the community, I absorbed their tastes in music; and I got into punk, and its derivatives, and now hip-hop. I like to dance too.

The less seriously I take it, or the less I think about it, and the less I obsess over getting things to sound the way I want them to, the more I enjoy it. Sometimes it’s just a vehicle for me to tell stories. I guess my relationship with music is mostly related to the society I live in, and to the way I think about economics and politics.

As a singer-songwriter, how imperative it is to collaborate with other artists?

Music made between friends seems to come up out of the blue, because it creates this noise that sounds like neither of the individuals making it. You stop listening for individual traits and the energy of the music really takes over. Doing this album was fun because it was an excuse to hang out with my friends and to learn from them.

We wanted to express the sense of community and care and love that we get from the scene, and to explore each other’s styles, and discover how little ideas like melodies, rhythms, phrases, arrangements or production techniques come instinctively to different people depending on where they learned them from, what their influences are, how they channel them, and so on.

I started out making music as a very different person than I am now; so the whole singer-songwriter thing is basically an accident.

You’re releasing your next album under the collective name ‘Karmaġenn’ soon. What can you tell us about this project and resultant album?

Karmaġenn started because I wanted to tell the story of my friends’ time at JC, and to write about the people I live around and see every day. I wrote based on what I remembered, and on what I saw happening around me last winter; mostly about small things in street life that I find cute or sad or funny or something.

I love listening to the way people speak, so little expressions that my friends use, or that my grandfather says, or that I heard on the bus, they made their way in too. Then the music formed itself thanks to different collaborations.

And there were more groups of people I wanted to get to know, so I asked them to do the art for the album. Together we managed to produce an album and a series of artworks, and I’m really grateful for everyone who accepted to be part of this project and helped bring the story to life.

As a musician who also happens to be an activist, do you believe in using music as a vehicle for social change, or do you prefer to view it as a cathartic experience of one’s personal emotions?

Um, I guess! The two aren’t separate. Music can be cathartic as well as a way to call out situations of exploitation, violence, and so on.

The work of artists like Little Simz, or Avantdale Bowling Club, or Ivy Sole, or Stella Donnelly, expresses this quite explicitly; their personal narratives are imbued with a deep social awareness and direct comments on what’s happening, why it’s fucked up, and they push towards change simply by talking about themselves.

Music always grows out of particular political and social situations, and it reflects the place and time it was created in. So it may be an expression of personal pain, but this pain may be caused by structural violence, so its very existence becomes a political statement.

Jazz grew out of oppression, and it served a central role in allowing people to think in terms of it when it came to constructing their identities and forming their rights as a community. Hip-hop grew out of different circumstances, but it can be said to have had the same effect.

I guess I feel that the most genuine, and personal, kind of music is music that comes up out of communities that use it as a means of personally expressing their political situation.

Musicians express their social circumstances almost without realising, um, and realising the way social feelings are channeled, almost without noticing, through music, often opens up the possibility of realising how music that isn’t as explicitly political as, say, Billy Bragg’s or Rage Against the Machine’s, can have greater social significance because of its articulation of wordless personal pain in the face of social tragedies. Coltrane’s ‘Alabama’ is a great example of this. I guess people do it differently; still.

Are there any particular goals you’d like to achieve with your music?