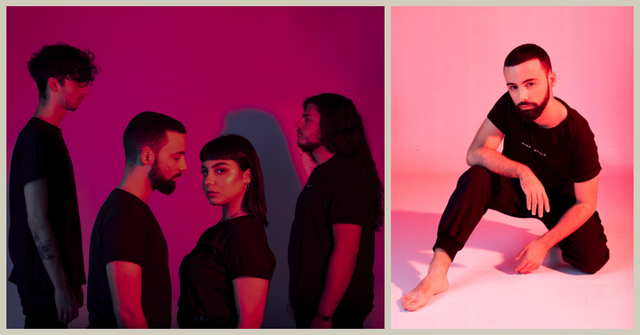 For those who are not familiar with ‘Oxygyn’ (and yes, the ‘y’ is not a spelling mistake), the term refers to a Maltese indie-pop outfit, fronted by the brother and sister duo Kurt and Katia Abela. Their first single, ‘Corrode’, was released 3 years ago and can be described as an acoustic, indie-pop ballad. A couple of days ago, their latest single – ‘Blindfold’ – was released on all digital platforms. It features a move towards a more electro-pop sound, building upon their 2018 release ‘Bubblewrap’.

Trackage Scheme caught up with frontman and lyricist Kurt Abela, just before the group was about to launch the song in a more grandiose manner, during local designer PARASCANDALO’s show at this year’s fashion week.

Hi Kurt! So what’s the concept behind Oxygyn‘s latest track?

‘Blindfold’ explains how we, as people, tend to get stuck in the past or worry about the instability of the future. The only way we can feel fulfilled is by taking off the blindfold and focusing on the present. We should appreciate what we have right now, make amends with our past and walk into the future with our heads held high.

What elements do you usually take into consideration when writing lyrics for a song?

There are multiple elements that come into play when writing lyrics… the most important of which is to get the message you want to convey across to the listener. When I write, I do keep in mind that there should be an element within the lyrics which is memorable. However, I give a lot of importance to the metaphorical nature of my writing style. I make sure that I still get the message across, but I also leave the lyrics relatively up to interpretation.

How much did your collaboration with Maltese designer PARASCANDALO influence this track?

Actually, this song is heavily inspired by PARASCANDALO. We’ve been collaborating with him for quite a while now and this led to the idea to write a song inspired by his newest clothing line. Marco (Parascandalo) shared the concept behind EYECONIC with us, and almost immediately, ‘Blindfold’ emerged.

Any future plans and projects for Oxygyn?

Yes, we have multiple plans in the pipeline. From new tracks to exciting performances, we really want to give our listeners something to look forward to.