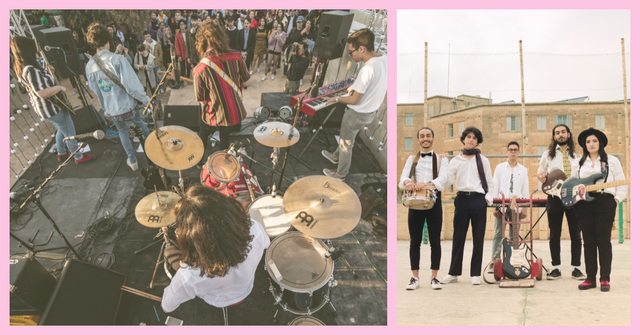 This self-described ‘not so bad’ band is an upcoming indie band composed of five passionate youngsters. It’s safe to say that in a scene that desperately needs new blood, roża serve as a much-needed injection of fresh air. Trackage Scheme caught up with the band ahead of their performance at this year’s Farson’s Beer Festival.

How did the project roża come about?

The project started when the bassist, Cheyenne, wanted to start a new indie-alternative band. Cheyenne put up a post on Facebook looking for musicians. Ben, the singer, eventually replied. While the initial meeting was awkward, we kept at it and decided to ask Glen to take up drumming duties as he was a familiar face to most of us already. After a while, our first single ‘Bag of Lies’ was released. Our keyboardist Matthew joined in late 2018. He was a great addition to our sound, and he brought forward fresh ideas to the table that made roża what it is today.

Which artists have been seminal in shaping your sound?

Various artists have influenced our sound as we all come from different musical backgrounds. Cheyenne is heavily influenced by the intricate yet melodic bass lines of Peace, Everything Everything and Late of the Pier. Matthew is influenced by Tame Impala, Beach House and Pink Floyd. The Kooks and Led Zeppelin have been a staple in Glen’s drumming while Luke and Ben are influenced by Mac Demarco, The Flaming Lips, Foo Fighters and several others.

As an upcoming band in Malta’s alt-music scene, do you feel that you are enough opportunities to showcase and promote your music?

We’re eternally grateful for all the opportunities which we’ve been given thus far, especially the chance to début at Rock the South back in April 2019. However, we do feel that there’s a huge need for new music venues.

We aim to release a new single and music video in late 2019/early 2020. In the meantime, we’ll be busy gigging and keeping our fans in the know.

Are there any other projects in the pipeline which you’d like to tell us about?

We’re currently busy writing new material which we hope to showcase eventually in an EP or an album.