Missed part 1? Check it out here.

In the National Archives in Mdina an old metal structure stands that is a testament to the human desire to be heard. Bigger than a person, one could – back in the day – approach it, put in a coin or two, and record a message right there on the street, a message that this Voice Recording Machine from the 1930s would immediately print for you to send far away to a loved one. I could imagine, nearly 90 years ago, that encasing your communication to be heard anywhere in the world, and, indeed, at any future moment, must have felt awesome. 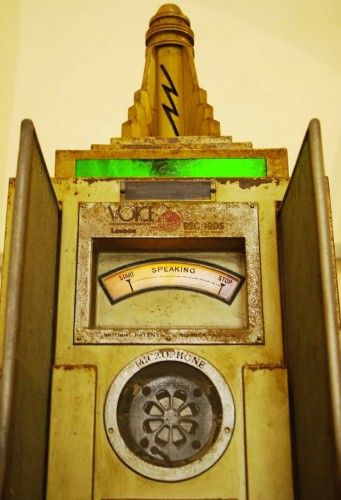 If only there was a communication for us from another time amid the dusty tomes just two floors above that machine, something that could prove that Malta did indeed have the oldest music store in the world. It may be written in stone, literally, on the threshold of the D’Amato Records in St. John Street, Valletta, that the store has been there since 1885, making it the oldest record store in the world – but we needed something more tangible than just stone.

Having found that advert of D’Amato’s musical wares in a newspaper from 1939 was something, but nowhere near what we needed. So we tracked backwards through the newspapers, using 1939 as a baseline. We were getting hopeful the closer we neared the 1894 date, the date Spillers in Wales, the (until now) undisputed oldest record store in the world, but quickly lost hope by 1886. 1885’s newspapers did not rekindle the hope.

Finally, Noel the historian, from behind his desk, turned to us and said “this is as far as I can help you with the archives.” If we wanted to continue searching for adverts, then we best head to the Biblioteca at the National Library in Valletta; we were told that they should have some more publications, such as the Guida Generale where one was able to advertise their company, and The Malta Chronicle, a popular English language newspaper, which might have some adverts. 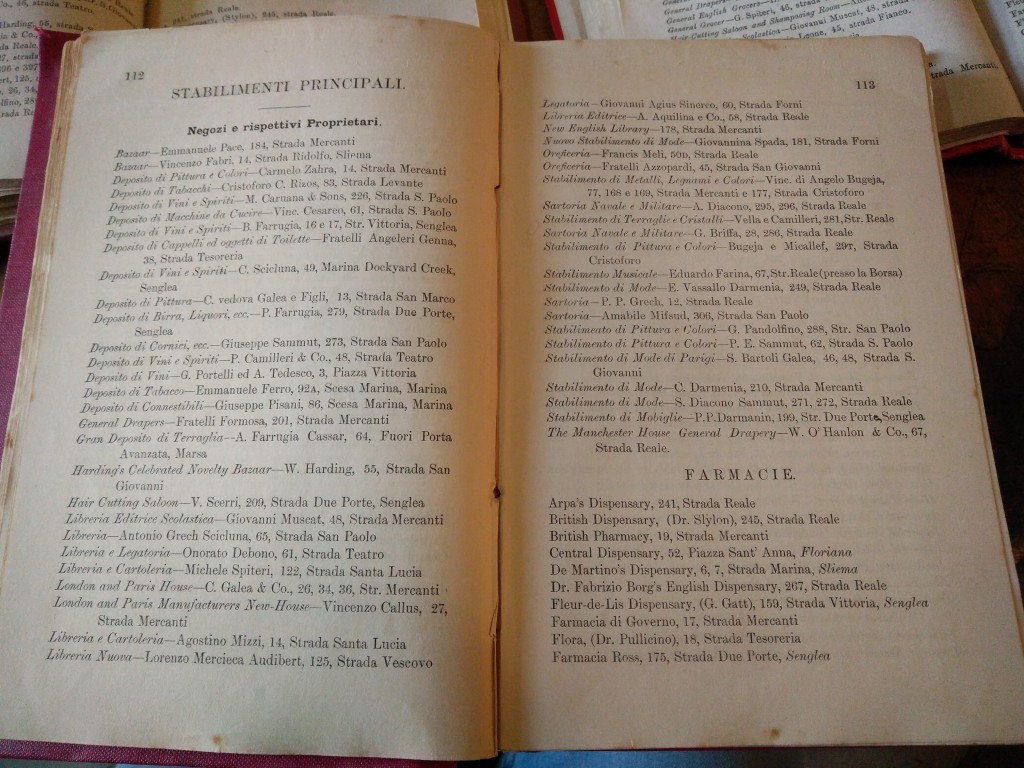 Needless to say, nought was found.

The Rabat Archives where next on the list – they housed tax returns from that era, along with a possible opportunity for some photos from the time. Surprisingly, they had some well preserved documents from 1885 – and they even had a copy of Giovanni D’Amato’s son Anthony D’Amato’s first ever passport, stamped for a trip to Gibraltar. The receptionist there noted how some Maltese businessmen travelled to Gibraltar in that time in connection with hotels.

They also had some retro photos from the time. One could easily make out the block of buildings that make up the Savoy Arcade which is nearby D’Amato, and some other aspects of the intersection between St. John Street and Republic Street, but no photos showing the facade of the D’Amato store were found, unfortunately.

Another nearby street, Strada Stretta – aka ‘The Gut’ – was known to be a music hub back in the day, and clearly people had cylinders, gramophones and vinyls back then to play music off of…and they must have been getting them from somewhere. We had seen a lot of early adverts for Simonds Farsons, the beverage group, and hoped beyond hope that they had fueled some wild early 1900’s anti-prohibitionist party in connection with D’Amato or HMV or something related – and taken photos to prove it. So we contacted Farsons and asked them if they had anything in their archives.

Alas, a search through their archives and music memorabilia yielded nothing of much worth, save some some LPs from HMV from the ’30s (which at least showed us that HMV was supplying some of the music, which could have come from D’Amato as the official HMV reseller), and being told that records of any sort from 1885 are going to be very hard to come by in Malta – apparently, not many things were recorded back then. We did, however, come across this curious piece of equipment, designed in in the 1950’s by Mr. Farrugia, the architect of the Farsons Brewery in Mrieħel. Mr. Farrugia (also known as Is-Sur Gig) designed units to house the state of the art Hi-Fi equipment that he purchased including a unit for the stand-alone loudspeakers. The units were manufactured at the Brewery’s carpentry shop. He had refined music tastes, with a predilection for opera and classic music. 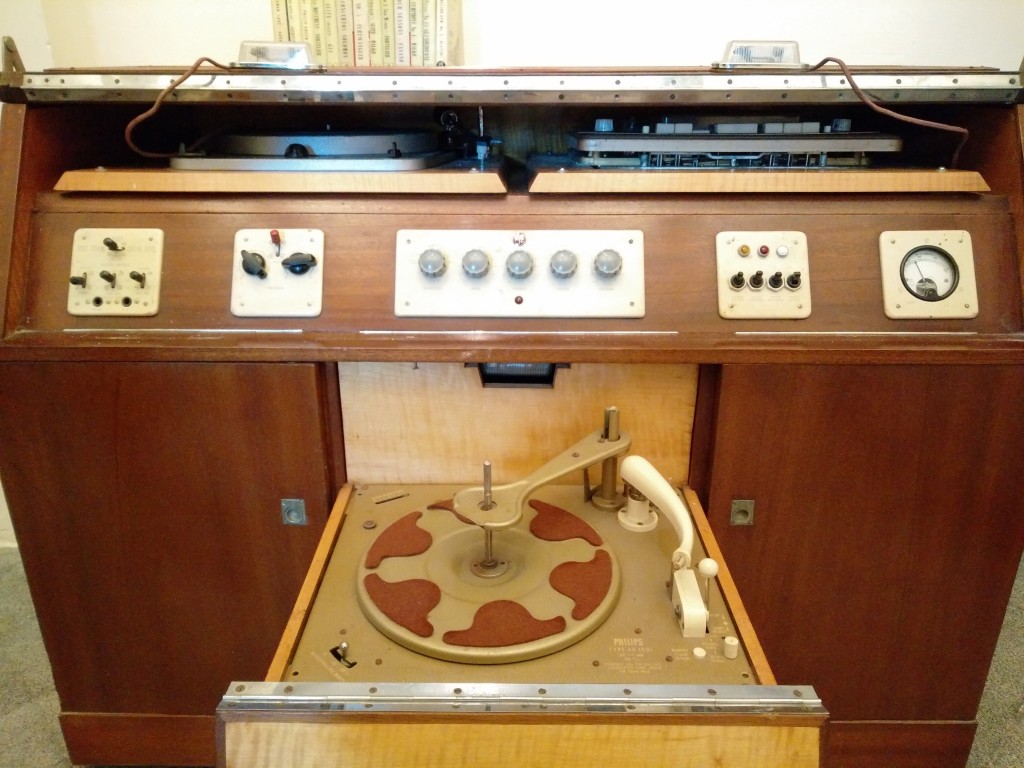 If no one else recorded anything, one organisation were bound to have done so – the Government of the Republic of Malta. Giovanni D’Amato might not have gone to court, or taken out any ads, but he must have had a import and export license to get those HMV records over to the Gut. So to the Government we headed, and quickly found out that dealing with the Government to find licenses from over 100 years ago wasn’t the easiest thing around.

After getting through the bureaucratic red tape, we were told for someone to import or export legally from the 1880s onwards, they would either have needed a tax number, or a merchant’s license. They were unable to find either of those things for any D’Amato, which means our man was either running things illegally, which is highly doubtful, or the records have become a rat’s mattress and/or kitchen.

I’m going with the latter.

We hadn’t been able to find relevant adverts, we couldn’t find proper photos, the merchant license was apparently non-existent, and what is written in stone may turn out not to be true. Or was it true?

If it’s actually set in stone, there had to be a land license or something of the sort. Giovanni D’Amato had to have taken over the physical area at some point, be it from a previous shop owner, or a homeowner, and something of that scale must surely have been recorded.

To make it easier, D’Amato Records is on Government-owned land, so the chances of finding the records were as high as they could be.

This search had started to feel like I was chasing the dragon without getting high. As if on cue, Noel the historian called with good news from the Mdina archives – he had found a record of a court case from 1889, D’Amato Giovanni vs Bugeja, in which Giovanni D’Amato was involved, regarding “the borrowing & owing of money and land,” without specifying the land, or what the money was for. 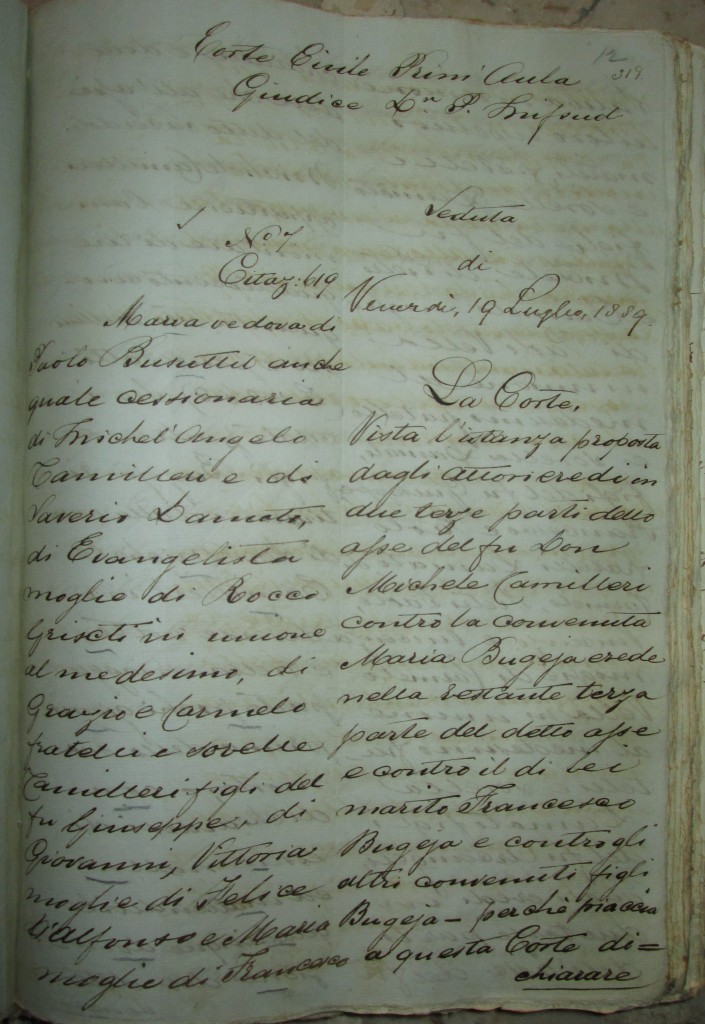 The date was on point though, and it implied he was a merchant. But what was he selling at that point, and was he selling it at the D’Amato location? We had heard that D’Amato might have started out selling furniture, and the “borrowing & owning of money and lands” part gave us no indication of whether Giovanni even started with music before the ‘30s.

We knew that the D’Amato store was leased, not bought, from the Government. If he didn’t need a public notary to obtain the land, he must have still paid rent on it. So we headed to the Lands Registry, looking for the some form of record of a ground rent on the D’Amato property. At the Lands Registry, we searched for ‘Giovanni D’Amato’, and found three hits in their database. By now we were so used to being told there was nothing from that time, we wondered if it was possible that one of those three Giovannis could actually be the guy we were looking for.

However, upon asking to see the records, we were told we needed either the parents’ names, or his death certificate, to access them. “I can not give you any more information without those other documents,” we were told by the operator.

The problem was, Giovanni was not born in Malta, but in Italy. But we headed to the Public Registry in Valletta anyway. We were feeling lucky. When asked what decade we wanted to search, we went for the 1910s – we knew he was born in 1861, we assumed he opened the store in his 20s, and the life expectancy from that time was about 50 to 60 years old – and that huge assumption, when entered into the database, paid off. 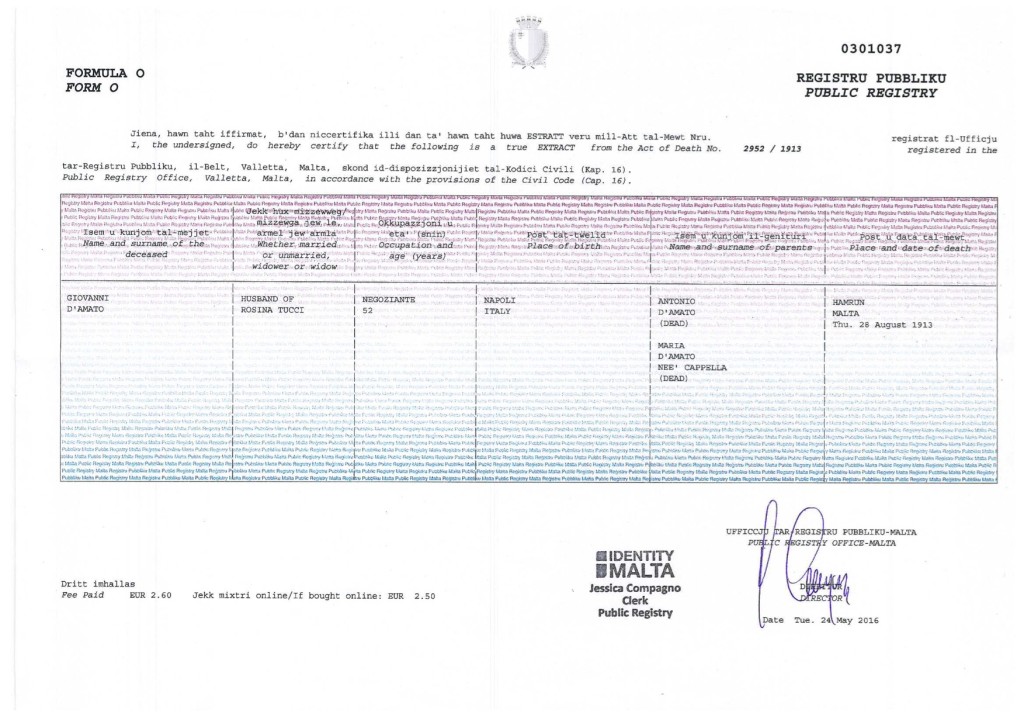 We had found two death certificates. One was listed for a Giovanni from Ħamrun – where the D’Amatos were known to be be originally from – and was listed as dying in 1913, and was listed simply as negozjant (merchant). We had confirmed when our man had died. Now we just needed to confirm what he did when he was living…

Special Thanks to Cain Farrugia, Noel D’Anastas, and Andrew Alamango for their help.