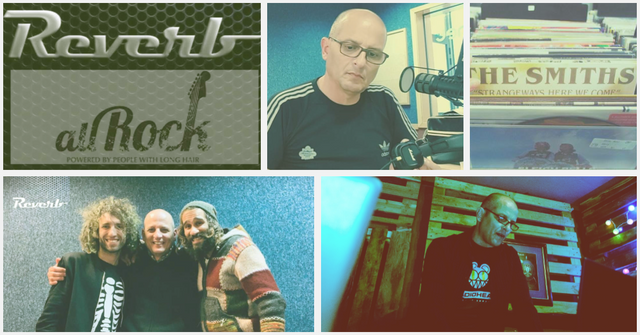 Our Spotlight Series continues with Tonio Pace. Tonio is another local pioneer, whose undying passion for the local and international alternative music scene is manifested through his radio programmes. Trackage Scheme chatted with Tonio about this love affair with alternative and indie music.

How did you initially get involved in music, and more specifically, Malta’s music scene?

From a very young age [mid-1970’s] by playing vinyl albums owned by my brother, which included Fleetwood Mac, Pink Floyd and Queen, Donna Summer, Giorgio Moroder and Kraftwerk. One day, The Human League’s album ‘Dare’ grabbed my attention, and it boosted my interest. It was and is still an innovative album that’s a prime example of the synthesizer evolution which engulfed the British scene in the early 1980s.
I have a particular love for Malta’s music scene, especially the alternative scene which I must say has evolved throughout the years … and fast. I used to play in a band, way back in the 90s. I know what a struggle it is to keep up with your bandmates, pay the garage rent and rehearse after work. I genuinely appreciate the passion many Maltese bands have for music and their project, and in my opinion, they’re also doing very well. I support them fully!

How would you describe your journey into the world of radio?

I got interested in this world at a very young age. I had close friends who were radio presenters/deejays at the time with whom I had the pleasure to hang out and discuss anything related to music. My journey started in 1991 when I deejayed on a commercial, privately-owned station. I enjoyed what I was doing; however, I kind of felt that I wasn’t allowed to play the type of music that I love the most, i.e. alternative/indie music. I must say that my love for this genre limited my chances to host local radio programmes until I joined AllRock DAB+ in 2011. I also have a weekly program on NetFM called ‘Walkman’, a 2-hourly show which features music from the 1980s and the 1990s.

If you could pick your top three bands from your teens, who would you choose?

There’s more than a handful, which makes it very difficult for me to answer this question. However, The Smiths, Echo and Bunnymen and The Cure complete my ‘picture’ in various ways.

As an avid festival goer, you know a thing or two about attending festivals abroad. Which festival would you recommend to a festival newbie?

I would definitely recommend the Primavera Sound Festival, which takes place between the end of May and beginning of June in Barcelona, Spain. The line-ups have, to date, attracted avid music lovers that span across genres, ranging from quality pop, rock, and the most underground tendencies of electronic and dance music.

So many … Morrissey, Blur, Radiohead, Queens of the Stone Age, Slowdive, Orchestral Manoeuvres in the Dark, The Wedding Present, The Cure, Nick Cave and Seeds, Daughter, Gary Numan, Suede, Pixies, The Breeders, Depeche Mode, MBV, Interpol, The Twilight Sad, Ultravox, Deerhunter, The KVB, Liam Gallagher and so many more. The list is endless!