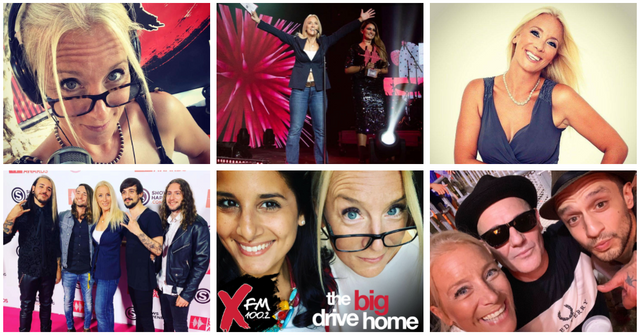 Here in Malta, Trudy Kerr’s voice is synonymous with the world of radio. Ms Kerr has been championing Maltese and Malta-based artists since day one. This is why we decided to include Trudy Kerr in our Spotlight Series – which aims to shed light on all those individuals who do their best to support the local music scene.

How would you describe your relationship with the world of radio?

Well, I love radio. I fell into being a DJ as a second career later in life and found my natural home. Radio is a phenomenal platform that I think can be underrated. As a drive time DJ, I have the privilege and responsibility of seeing listeners through, what is often, the most frustrating time of the day, and my job is to make it better and easier for listeners.

I recently called a delivery service to see when I could pick up a parcel, and the lady on the other end of the phone must have recognized my voice as she finished the conversation with ‘and thank you, because you get me through my drive home every day’. I don’t think anything can match that.

How did you initially get involved in producing radio programmes here in Malta?

Quite by accident. I was in a meeting with a client of my design business, Clint Bajada. Clint had just been appointed head of ONE Radio, and in the meeting, Clint asked me if I had ever done radio before. I said that I had done something briefly back in University, but Clint took a gamble and made me a co-host three evenings a week on the station. After 11 weeks on air, I left to go to Australia for a month and came back to find out that I had been made a permanent feature, and again, quite by accident my first guest was international pop star Trevor Gutherie. I spent 3 years at ONE producing and presenting both radio and TV.

In early 2016 I approached Jay to see about any openings on the English speaking station, but at the time there were no opportunities. Towards the end of that year, I was preparing to leave Malta for good, and during my flight back to the UK between take-off and landing, four job offers landed on my phone. One of which was from Jay offering me The Big Drive Home. Easiest decision I think I have ever made. I turned down three other jobs to start my journey with XFM.

It took time to master managing the technical side of the show, as well as the content, music, delivery, traffic, competitions, guests and the occasional drama, but I have now developed the show to reflect a style and content.

What’s the most memorable interview with a local artist?

Wow. Tough question. I am always amazed by the quality of local talent here in Malta, and I have had the pleasure of interviewing so many amazing bands and artists. And I wouldn’t want to miss anyone out, as every interview is brilliant.

I had an interview with Metal Band Align The Tide a few years ago, and it had been lead singer Kyle’s birthday the day before, and the lads had been on a big night out. The guys were a brilliant interview, but guitarist Alston just slept in the corner of the studio nursing a terrible hangover. When it came for the Quick-fire Question Round we shouted at Alston’ favourite band?’, he looked up, shouted back ‘Blink 182’ and went back to sleep… the studio roared with laughter…

But some songs have really moved me, and when you have a first on-air play with the artist(s) sitting opposite as they describe the story behind the track, well, that can get quite emotional. The New Victorians, Kevin Paul, Matthew James and Toby Farrugia, The Travellers, Luke Chappell, Ivan Grech all spring to mind, the first airplay of New Day by REK on New Year’s Eve was so emotional that I cried on air.

And more recently interviewing Giorgia Borg was very memorable for very different reasons. It was so funny and so high energy that I shall never forget that one. But every interview is memorable — way too many to mention.

Are there any specific Malta-based bands/singer-songwriters that you follow religiously?

The beauty of being a DJ is that we get to listen to ALL local music that comes out. And maybe because of that, I am more about the song than the artist. If the song is good, even if it is not necessarily my genre of music, I will fully support it. Bands and artists release what I would consider to be both great songs, and songs that are not so strong. But name any artist in Malta, and I will tell you what my favourite is… hey – maybe that could be a challenge on the Kicked Back Edition of The Big Drive Home on Friday with Tez! Cool!

Any career-related goals that you’d like to achieve in the near future?

As being a DJ was never on my career plans, I am still in the process of perfecting the role, even after six years. I work alongside DJs who have been working in radio for decades… and it is still a goal to get a ‘perfect show’ – though the definition of that in itself is always changing. I love a show that is packed with listener interaction, as that means that I am doing a good job. Sometimes that means that the show isn’t technically perfect, but to me, it is all about the listener and delivering the best three hours I possibly can. The Friday show with co-host Tez Saliba (Camilleri) is always brilliant, mostly unscripted, and very, very funny.

Presenting events is always a great adventure; for instance, presenting ten nights of Farsons Beer Festival has always been a highlight.

And then, there are all of the worthy opportunities that come from just being in the public eye, supporting the Armed Forces of Malta, working with NGOs and Charities, environmental campaigns…

So, for now, more of what I do… and doing it to the very best.