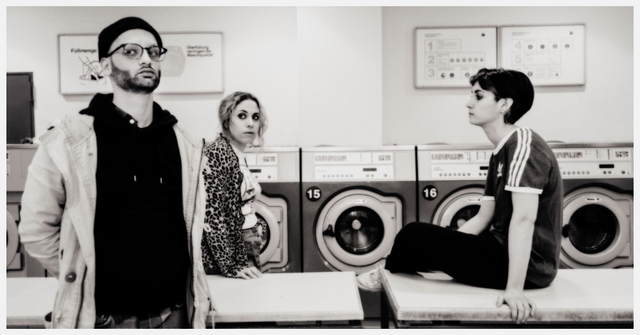 Superlove is a brand new indie-synth group with familiar faces. Daniel, Alexandra and Rebecca have all been involved in a variety of projects here in Malta, before moving to Berlin to further their musical career. Trackage Scheme caught up with the group ahead of their performances in Malta.

How would you describe your musical journey so far?

Our journey can only be described as ‘interesting’. It’s been full of wonderful experience since we’ve worked and are still working with a tonne of seriously talented musicians in Malta and Berlin.

Why is Berlin so appealing to you as a musician and an artist?

We’re still fascinated by this city’s culture and society…it’s also relatively cheap to live in! It’s been a long process to settle here and find our group, get used to the scene and make a name for ourselves, but it’s safe to say that we’re doing it. It’s very convenient to live in the centre of Europe for travelling and touring, buying equipment and meeting artistic individuals from all over the world. The experience that comes with living in such a multicultural city is immeasurable.

How did the project Superlove come about?

Superlove was born when one of Daniel’s songs was chosen to be featured on a cassette label. After a series of fortunate events (including Rebecca’s move to Berlin) it quickly developed to a live band.

We still follow what’s happening in Malta, especially since a lot of our friends are still active in the Maltese music scene. It’s been a while since we last performed in Malta. Our last show as Skimmed took place 4 or 5 years ago. We’re glad to be back this year as Superlove for the Farson’s Beer Festival and a more intimate show at Storeroom.

Any plans which you’d like to tell us about?

We’ll be playing more shows around Europe, and we’re also releasing a music video for our second track…which is going to be in Maltese. Hopefully, we’ll be back in Malta next year for another show. But who knows? We tend to take things a few months at a time!