Tazza te and some vintage clubbing

Malta, circa 1987: Ċikkulata Catch, ftira bis-sunflower oil and 8am mass.

Also Malta, circa 1987: Mohawks, ghetto blasters by the Triton Fountain and smoking weed at MaltaSajf.

The glorious contradictions that make up Malta’s history are also what make our island so uniquely loveable. Nostalgia is a deceptive, if enjoyable, mistress. It makes us gloss over the annoyances, helping us remember only those parts that tug at our heart strings. And annoyances, 80s Malta boasted quite a few: political strife, religious extremism, parochialism, inbreeding and the most tragic disaster of all – no Cadbury to help the pain go away. But it’s the charming quirks that we all love to reminisce about, the weird and wonderful journey that our island had to undertake to reach the 21st century, mostly kicking and screaming. This journey saw Malta move from the frankly weird 80s to somewhat calmer 90s and noughties, with the creative and performing arts in particular – clubbing and theatre taking off bigtime, building on the surprisingly diverse scene that already existed in the previous decade. Enter names likes Axis – taking on Malta’s clubbing population from the 80s all through the early noughties, and its main rival Styx; Raffles, Pembroke’s main claim to fame; Liquid, the successor to Vibes, which saw the birth of Malta’s underground techno scene and is still going strong today.

And it’s exactly this golden era of Maltese clubbing, the years that started it all and shaped the Maltese scene into what it is today that the Club series of art prints created by Te fit-Tazza celebrates. The brainchild of Craig Macdonald and Andrew Farrugia, Te fit-Tazza has become a household name since its inception. Much like the Maltese ritual it is named after, in fact. What could be more quintessentially Maltese than tea served in a long glass in a quaint village bar?

True to its name, the artistic collaboration has, so far, given us a series of prints that showcase everything we love best about the Maltese identity. We’ve had the luzzu; traditional doorways; landmarks like Qbajjar, Filfla, t-Torri l-Aħmar…. and we’ve also had the series celebrating true Maltese icons like Kinnie, Benna milk cartons, Cisk, id-Denfil and so forth. As the guys themselves put it, the idea is to capture elements of the Maltese identity. So it was only a matter of time before the duo’s talents moved on to the clubbing scene. The Maltese love a good party. And, even if in other matters we may still have some catching up to do, this island has enjoyed some pretty world-class clubbing nights, whether mainstream or not. 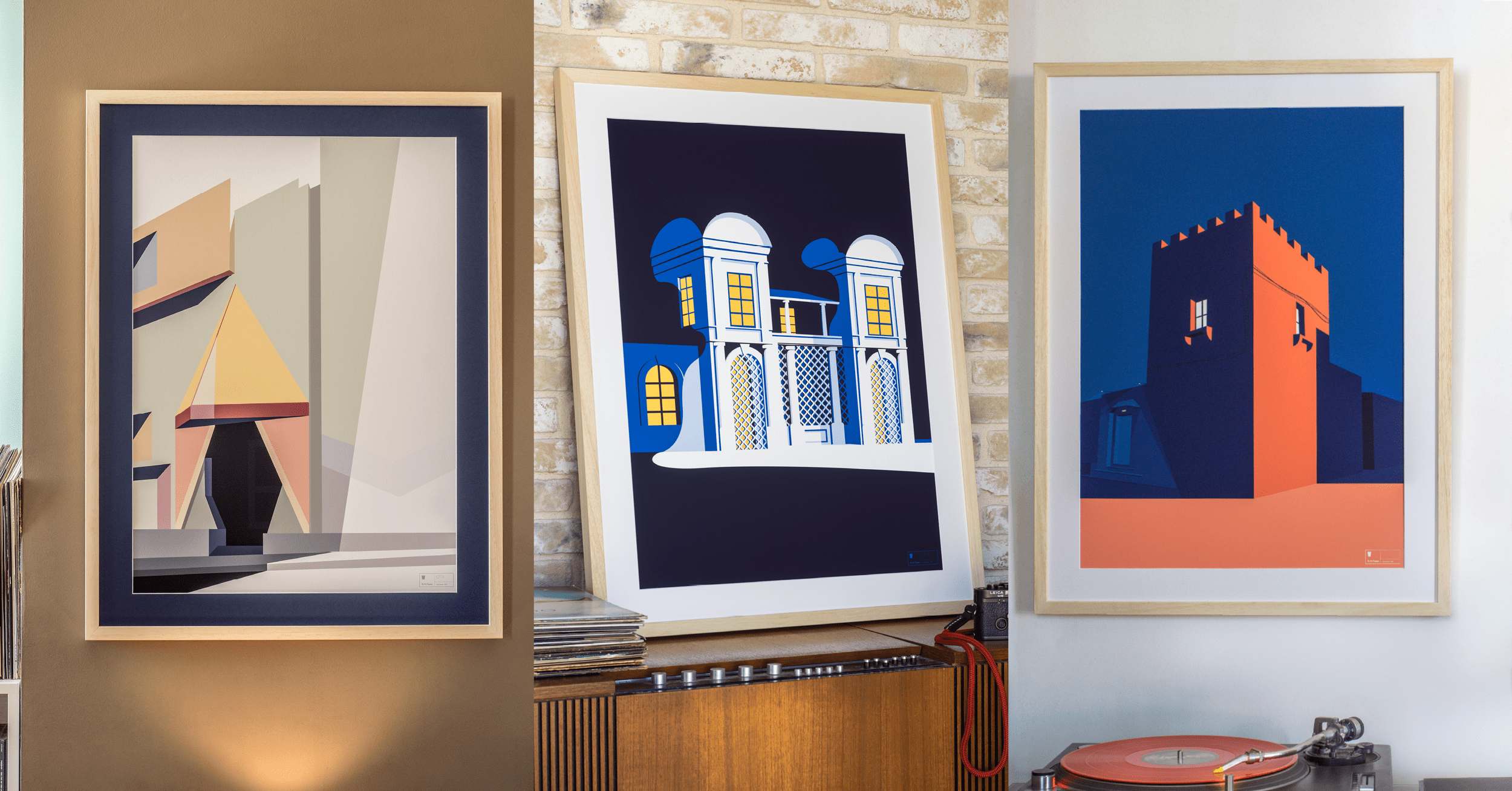 Enter Te fit-Tazza’s Club series, which ties in pretty well with the very ethos that Trackage Scheme itself works to promote, i.e celebrating Malta’s musical heritage with particular reference to alternative music. Both pay tribute to all those elements that have helped the Maltese scene evolve into that which it is today. Trackage Scheme achieve this by taking a journalistic angle, recording the scene for posterity. Te fit-Tazza, on the other hand, takes the artistic approach, creating artistic pieces that will help people remember the legendary locations where it all started for years to come.

In founder of Trackage Scheme Ben Vincenti’s words, “Te fit-Tazza puts the spotlight on Malta’s culture and heritage beautifully, through their iconic prints. They are also raising the bar when it comes to quality of design and production, setting the right example for others to follow.”

This, Vincenti feels, places Trackage Scheme and Te fit-Tazza squarely on the same wavelength, by celebrating local art that is inherently part of our culture.

“These three prints pay tribute to Malta’s music scene, specifically the electronic music scene and their audiences and subcultures. Such a tribute aligns perfectly with our mission to support and promote the Maltese alternative music scene,” he says.

His words are echoed by Andrew Farrugia: “Craig (Macdonald) and I wanted to celebrate the Maltese clubbing scene, mainly because we’re both into music (Craig’s a DJ and a vinyl collector).”

But why pick these three specific locations? Farrugia says that, while carrying out research for this series, both of them focused particularly on their own personal memories of the scene when they were growing up.

“Axis was the main club when we started going out to Paceville as 14 to 16-year-olds.  Liquid is the club we still go to today, and Craig did his first street art at Raffles, so there’s that personal memory element to the place too. Not to mention the fact that, from our research it looks like the club had some seriously fun nights, and the architecture is very aesthetically pleasing,” Farrugia adds.

In truth, it is literally impossible for anyone who claims to have been part of the Maltese clubbing scene at any point in time to look at these three prints without feeling a tug at the heart strings. 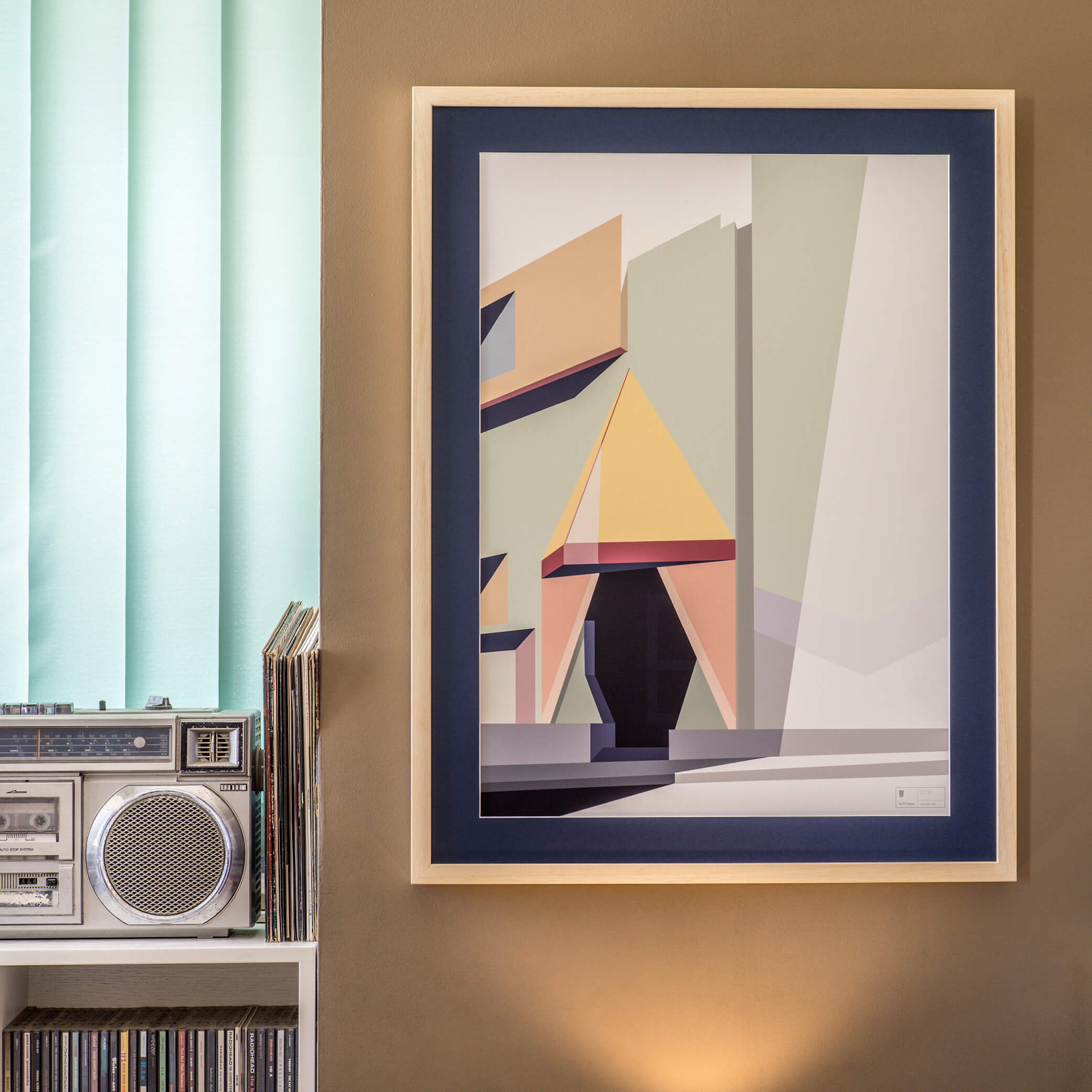 Take Axis, pretty much the only Paceville mecca for years for those who wanted to enjoy a taste of the closest thing Malta had to mainstream clubbing, before others like Styx, the Palladium and eventually Tattingers and Gianpula followed suit. For close on to two decades, it ruled our capital of entertainment; it only takes a look at the Te fit-Tazza print to take those of a certain age back to catching the No 67 to see the original 6.30pm laser show, the talcumed dancefloor, the make-out sessions on the upstairs sofas… To the days of LA Gear and Reebok, Woodpecker’s cider and pre-drinks at Fredu. The memories are made even more poignant knowing that the once iconic facade has now been demolished to make way for a supermarket. Which makes the Te fit-Tazza print that much more sought after, of course.

The Raffles print is just as poignant. Raffles – or Raffles Discotheque, to give it its grand, full title – was another 80s product, offering all the OTT glitz that the decade was known for. Clubbing was taken very seriously back then; Raffles was all about the sequins, high heels and the older boyfriends with credit cards. In short, way too sophisticated for the likes of me, until I grew a bit older and got into the whole New Romantic scene, mostly thanks to Depeche Mode’s Black Celebration. ­ If I remember well, Raffles was also the disco (ah, what a word!) that hosted Samantha Fox, the singer whose real claim to fame stretched south of her vocal chords. For your average 80s dude, this was a bit like meeting his favourite porn star in the flesh (sorry). Raffles closed its doors way earlier than Axis, mostly because a fire had destroyed it, which pushes up the poignancy level of the Te fit-Tazza prints a notch or three higher. 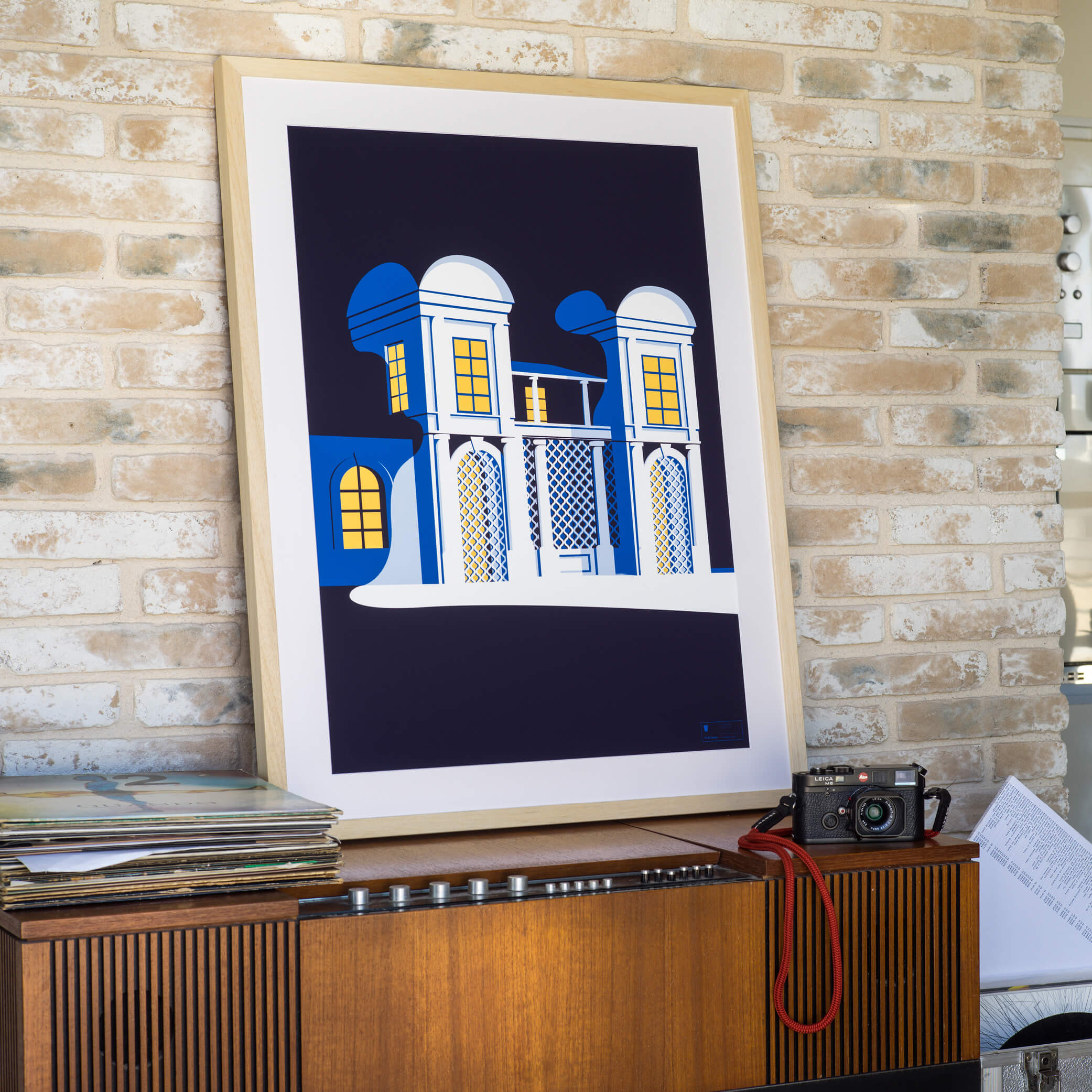 Finally, Liquid, in San Ġwann. The more edgy, less mainstream, successor to Vibes Disco. The cradle, some might say, of everything electronic in Malta. The scene of some amazing raves; the second home of any self-respecting techno lover. Like all other icons, it has seen its fair share of dark times. However, it has also seen more than its fair share of amazing times, with A Class international headliners and Malta’s top names still a regular . The only club that is still standing from the Te fit-Tazza trio, so to speak, the Ace of Clubs. 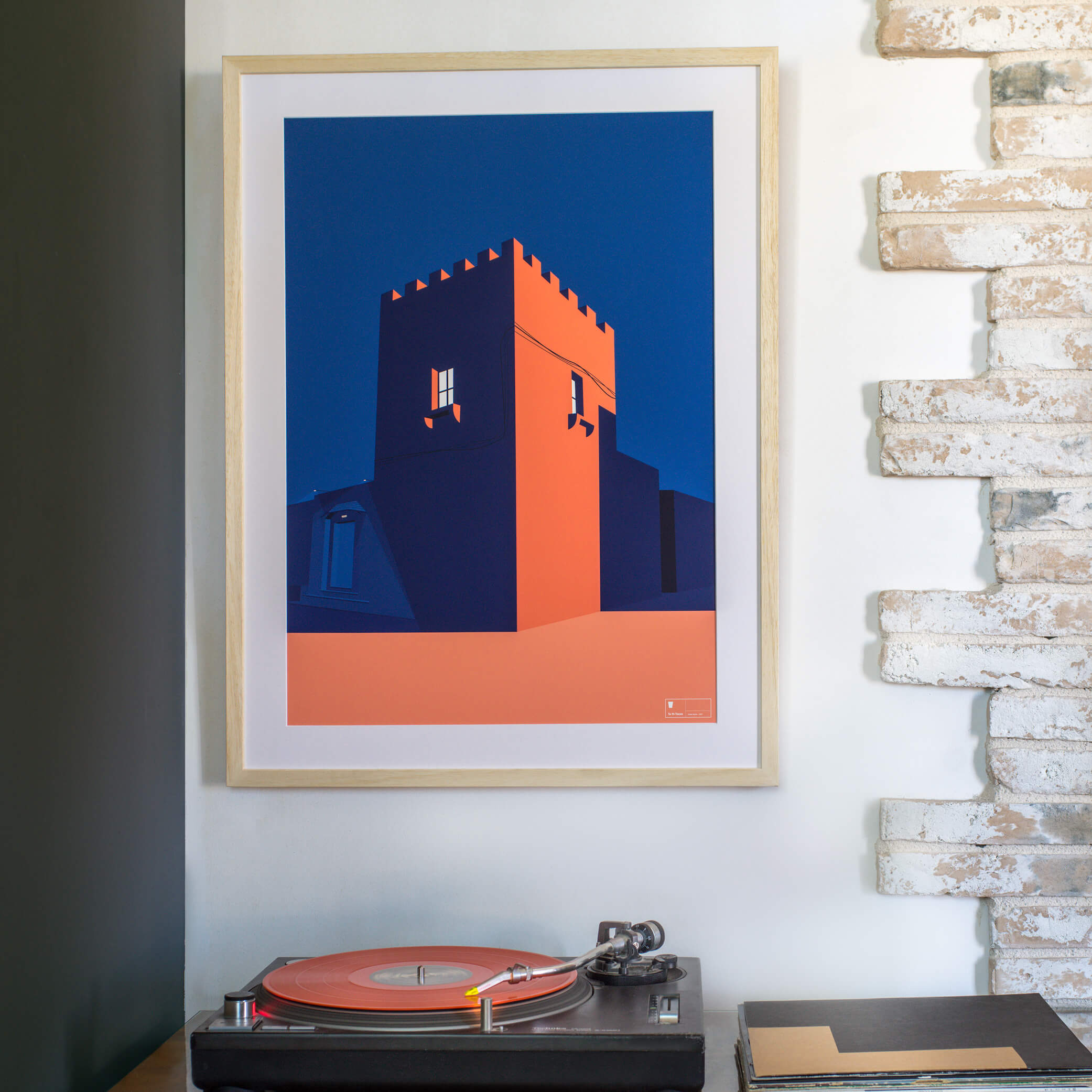 In the meantime, our collective memories and our sense of nostalgia are unlikely to forget those golden days, also thanks to initiatives like Te fit-Tazza and Trackage Scheme.

Music as a form of therapy