The Search For The Oldest Record Store in the World

A quick Google search shows that the prevailing understanding is a certain record store called Spillers lays stake to that exact claim. This was opened in 1894 in Cardiff Wales. However, it moved location in the 1940s, and again in 2009, so it hasn’t remained in the same place throughout the years, unlike the Megalithic Temples – or D’Amato Records. 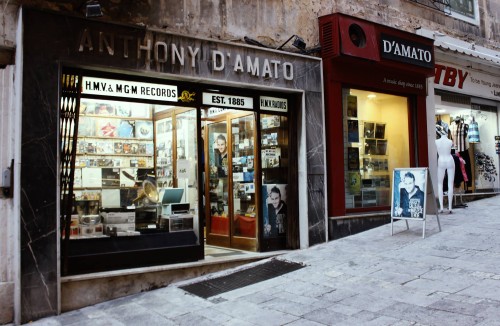 D’Amato Records in Valletta has indeed remained in the same spot since 1885, or so the “EST. 1885” marble floor upon entering the store would have you believe. D’Amato Records bills itself as the Oldest Record Store in the World – it even says it on their card.

They are so old they’ve never even heard of Facebook – well, kind of.

“We don’t do any Facebook or anything because we are more boutique, we’ve got a very loyal customer base that comes back every week to buy new records,” says Anthony D’Amato. Anthony, along with his two cousins, run the store. “The store was set up in 1885 by my great, great grandfather, Giovanni D’Amato, who was born in Italy,” explains Anthony.

They now sell about “30% vinyl, 30% DVDs, and 30% CDs,” but it wasn’t always so – they originally opened as a furniture store, not that Anthony knows much about those early years, 131 years ago. He was interested in the origins of his store, but he didn’t seem to know too many details, even about his ancestors; he could not go more than two generations back. Giovanni D’Amato he knew, but not who his parents were.

Then again, I probably couldn’t go back that far myself. 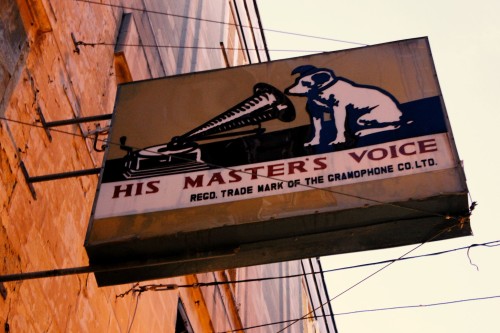 “I, of course, care about being part of the oldest record store, and it’s something that the country should care about as well, but it hasn’t caught on that we are the oldest store around. I want to authenticise it, though it’s very hard; there weren’t even taxes around back then,” he laments.

He goes back to the earliest date he knows about: the 1930s.

“We used to send Maltese musicians up to Milan to record, like Emanuel Cilia; in fact, the only stamp Emanuel had in his passport was for Milan. He recorded in Milan, then it was sent to England for mastering.”

“His record was very big thing on the gramophone,” he continues. “The reason we started recording Maltese artists was to sell more records, really. We were also involved with instruments, but I never saw any myself, nor did my father.”

The work D’Amato did with some of the early Maltese artists is well documented, and gave us some of the best early recordings of Maltese music, amongst other things: “One singer we sent up to Milan around 1936 returned with a coffee machine, which was probably the first coffee machine in Malta.”

While D’Amato may be able to claim to have helped bring the first coffee machine to Malta, claiming to be the oldest record store in the world is a mean feat, and we needed proof. Anthony pointed at a warped hump of tiles on the floor, near the check-out desk. “That’s from years and years of humidity,” he says gingerly.

After enquiring for any sort of deed or contract, Anthony explains that the only way we’d get paper proof of their legacy, was to go to the archives. So to the archives we headed.

Searching for proof for the establishment of a company way back in the 19th century in Malta is a tricky business. We enrolled the help of Noel D’Anastasi at the National Archives of Mdina, and first looked at the court cases that has to do with merchants and land appropriation, in the hopes that Giovanni might have gotten into some trouble regarding music: maybe he had used a recently sold vinyl as a frisbee and it had hit a nobleman who took him to court in 1886? One could always hope.

Luckily, D’Amato isn’t the most common name, yet while we found a few court cases involving the D’Amato clan in the 1880s and 1890s, none of them were conclusively pointing towards a music, or furniture, business.

We then checked for adverts in the National Bibliotheca . You’d be surprised at how many publications there were back then: Times of Malta, Il-Ħmar ta’ Gaħan, Il-Currier Malti, Il-Veru Mannarinu, Risorgimento, Lo Studente, Il Diritto ta’ Malta, and La Voce di Malta. We found adverts from Maltese music stores from way back in 1885  – Muscat Music, anyone? – yet none for D’Amato. It was like finding ads for McDonalds and KFC, but not for Burger King.

These old publications showed a whole different Malta – but it was a Malta lacking in D’Amato adverts. 1930s is old, sure, but it wasn’t enough. So we headed to the the Melitensia at the University of Malta, and found yet another advert of theirs appearing in the Times in the 1930s, advertising the sale of the latest portable gramophones.

We always found something that took us a step closer, but was never what we were actually looking for…was there any way to prove that D’Amato was indeed the oldest record store in the world?

With special thanks to Cain Farrugia for his help.