The Year of the WiFi Woodstock – Reinventing Music Festivals For 2020

“Let’s try and be creative and let’s get ready, because once this is over we get to experience some amazing events. Now we know what we’ve lost.” – Nick Morales, founder of Rock The Quarantine

Finally, some good news! Rock The South goes couch-surfing as organiser announces the festival will be held in cyber-pit this year. Band tees at the ready… 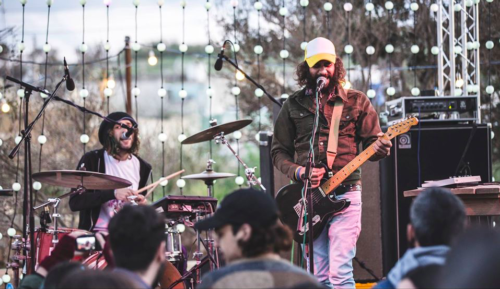 Whilst being laid off from work hurts your pocket, having your festival slot cancelled will hurt right in the feels; and thats just the performers. Last month festivalgoers came round to the news that amongst countless other local favourites in Malta including Glitch, Earth Garden, One Drop and Rock The South, the almighty Beerfest is off this year due to guidelines on gathering in large crowds due to the COVID-19 pandemic.

Say what you like about the Beerfest, long queues, “too commercial…”, but it’s got to be said that some of the best concerts I’ve seen in my time have happened on those stages. Beesqueeze’s Kriz Haze crowdsurfing, The Velts signing their new 7” single for fans backstage, Fuzzhoneys head banging – all memories to be cherished. It’s a summer highlight for music lovers, and comes part and parcel with the smell of greasy food trucks, the feel of the dusty ground beneath your rubber soles and forgetting where you parked your car. Oh, the things we miss.

I don’t mean to rub it in, I apologise. There’s always a silver lining to every cloud, however, and whilst online “festivals” might not scratch the itch that comes with being elbowed in a mosh pit and holding your bestie’s hand leading the way to the next rig, they’re a morale boost for both audiences and performers, keeping the invisible knots that bind us all as one big scene firmly tightened.

We’re all in this together, and we’ll get through it and out the other end with a flurry of events to attend once “All This” is over. Beach parties with guitars, spontaneous sound systems and midnight rooftop dancing… we’re going to have a lot to make up for and we will. Hang in there. 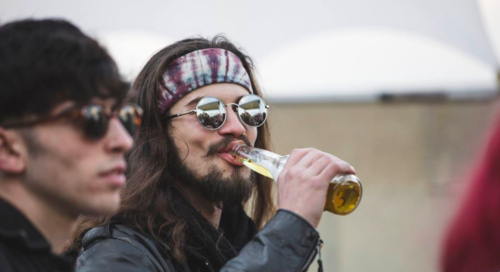 Until then, festival organisers who’ve toiled to bring us the best lineups for 2020 have had to adjust to this fuckery by thinking on their feet and trying their utmost to bring us fresh performances transmitted straight to the comfort of our own homes via our devices.

Trackage Scheme had a chat with multi-band musician Nick Morales, founder and organiser of Rock The South, which is celebrating its 9th edition this year. RTS traditionally opens the festival season in true gnarly fashion at Marsaskala’s iconic bayside yard dem, Zion. This year’s physical edition has been cancelled, but not in spirit, and Nick’s rounded up a few of our favourites to tide us over with his lockdown baby ‘Rock The Quarantine’ ’til we can all rock out together as one. Kuraġġ. 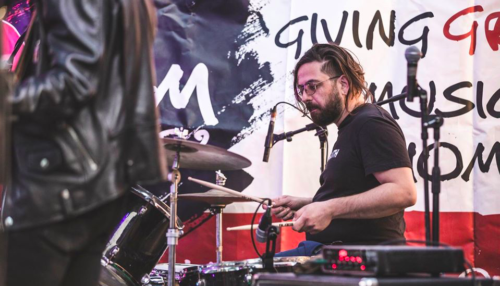 Nick! This has got us right in the feels. How are you dealing with all this?

It’s been pretty hard to just accept thats the Zion festival is not going to happen. In the past, even when times were hard we always made it happen, we’ve never missed a year, but this time it’s totally out of our control.

For the first few weeks when it started to sink in I had panic attacks, then I decided I couldn’t just do nothing about it so I came up with the idea for ‘Rock the Quarantine’. At least this way we can keep it going and put our energy into something.

Also, for the fans and the alternative crowd it’s important to keep things going. There was ‘Lockdown Festival’ (online) in March but it’s always important to keep things happening in a bigger scale. Hopefully we will get it out there to a wider platform, even reaching out even people who might not have normally attended Rock The South. Next year will be a decade of RTS. It’s crazy that it’sbeen ten years already, the first one feels like it was just yesterday! 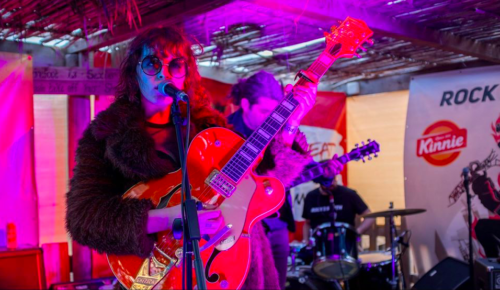 How do you think we will, as a scene, be making up for the lack of summer festivals? Would you consider a winter RTS?

For sure. What it will be called I don’t know, but once that date comes out I’ll be the first to get some bands together to plan something big! Even just the idea of not being on a stage, personally, is just really hard. Not being on a stage or in a mosh pit… it’s sad, it’s what I live for. For me, playing live is like therapy. It’s very important for mental health, music has helped me a lot through hard situations in my life- it’s heatbreaking for sure.

“It’s more than people just jumping around. It’s times like these that we realise why we do this, why we start bands, play in bands, and why music is so important- giving joy to people. To me, it’s what life is all about.”

When I saw that Earth Garden and the Beer Festival were cancelled, that’s when I thought… “shit.” I was hoping that beerfest would be on but no. It sucks. We have to be creative I guess.

I think now, after it’s allowed of course, house parties will be a bigger thing, I experienced this in America when I was touring with Bila. So much fun! Hopefully that might become a trend here too. It was probably one of the highlights of our time in America. Maybe we can have basement “kantina” house parties with bands in Malta, we’ll see! 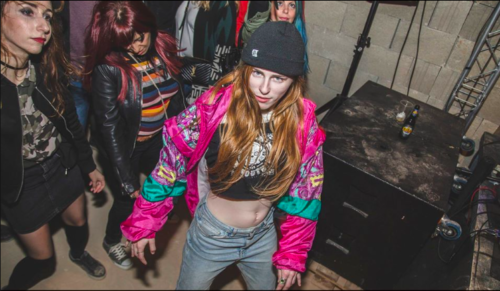 Tell us, What’s in store for the online ‘Rock The Quarantine’ festival?

We didn’t want to just do a live streaming event as it’s been done a lot already, which is great mind you! So for RTQ we wanted to do something a little different, partly pre-recorded and edited by myself and Nick Bonello. There’ll be a three-hour show on each day filmed from the bedrooms or households of musicians.

We’ll be putting in some interviews as well, with people in the music and events industry who dont get as much recognition; like the sound guys, venue managers and so on. We’re also throwing in some great footage of past editions of the festivals and some recorded messages of support from foreign bands we’ve hosted in previous years. 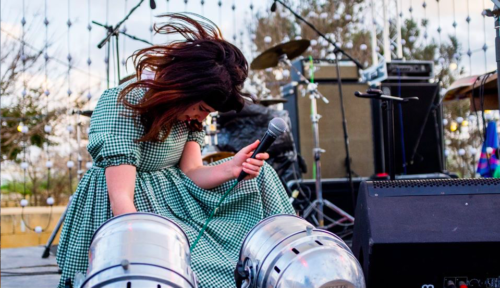 Of course funding was an issue, so to make this work I went all out, through every link I could find and even writing letters to the minister and applying for Arts Council Malta funding which we unfortunately did not get. In the end we got funding from Rock n Malta thanks to Festivals Malta which is great!

“You have to adapt, it’s the only way to keep sane.”

At the end of March I had a horrible time, with a good two weeks of depression. I could easily fall into hardcore emo depression, but you have to keep your spirits up, so this festival has been helpful for me and hopefully will be for others too, bands and audience!

We’ll be including a few live snippets where we interact with the audience, as we want to enjoy the feeling of having it “live” and not just a link to a recording, so the festival will be streamed. We’re also going to have a fundraiser platform with Trackage Scheme where we’ll be selling off a lot of stuff for a donation so that we can get something in return – festival stall merch like vinyl, tees and stock to support the bands who are taking part. We’ll issue a Revolt number for those who want to give a donation, and hopefully we can recreate some of the vibe the best way we can at this time.

Amaze! Sounds good to us. What’s your favourite Rock The South memory to keep our spirits high?

Wow. There are so many, but just off the top of my head, it might have to be watching London-based Japanese psychedelic punk band Bo Ningen on stage last year. That was a very special moment because it took months to make it happen, and just seeing them there extremely hyped playing an amazing show with the crowd was crazy better than you can ever have imagined. 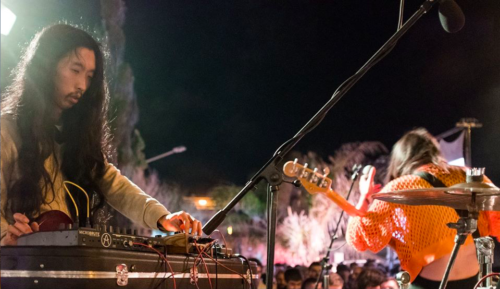 To top it off, the band had and amazing time, spreading the word about Rock The South around London and sending me emails asking about playing again at the festival! Hopefully they will be able to come back in 2021. In fact, that’s how Pulled Apart by Horses got interested in playing RTS, by word of mouth that went around. That shows that we’re doing a good job. It’s awesome that they’ve taken the time to send us a message of support that we’ll be including in the online festival.

With Rock The South, even though I’ve put a lot of time and money into it, it’s given me a lot back. I do it for the soul. These things make it worthwhile. Even though some people might think I’ve made a lot of money, I’ve lost a lot of money. Festivals are a huge risk, it took me a few years to get it right because it’s still not a big budget thing, but it’s enough to make everyone happy. There’s huge support from everyone involved, so thats really great.

There definitely is, it’s a beloved festival mainstay! Finally, do you have any message you’d like to send out to festival goers?

Its cheesy, but we really are all in this together, and everyone’s feeling this. Let’s try and be creative and let’s get ready, because once this is over we get to experience some amazing events. Now we know what we’ve lost. Hopefully we’ll party like it’s the end of the world.

The arts are going to suffer but let’s hope that people keep on working to get bigger bands and bigger events to Malta. Never in my wildest dreams would I have thought I would have the opportunity to play before Kaiser Chiefs and The Hives in Malta, so it’s exciting to think of a time when we can get back to that, travel-wise.

Hopefully this will keep happening to give other future bands and generations the chance to do the same. For now I’m recording with my band, and using this time to do business plans that I didn’t have time for before, to make next year’s edition better than ever.

TUNE IN ON the 15th 16th and 17th May FOR PERFORMANCES FROM:

SUPPORT THE CAUSE AND BUY MERCH HERE!