The journey so far

It’s a bit of a funny story really. Some friends of mine and I were just chilling out and listening to some music after an event. At one point, I got up, put on a track and said: ‘You know what? The Government should create a Trackage Scheme, instead of a Scrappage Scheme’. At that point, I wanted to create a platform (‘scheme’) where people could ‘submit’ tracks, and in exchange, receive tracks from the other members.

On 27th June 2013, the Facebook group was launched to serve as medium where friends, and friends of friends could share tracks and increase their repertoire of music, across any genre under the umbrella of ‘alternative music’. With time, more and more people joined the group and it became clear that something good was brewing.

After a few months, we still had the original ‘Scrappage scheme’ cover photo which was essentially a screenshot of a Times of Malta article with ‘scrappage scheme’ very bluntly crossed out with Microsoft paint and replaced with ‘Trackage Scheme’ (as shown below) 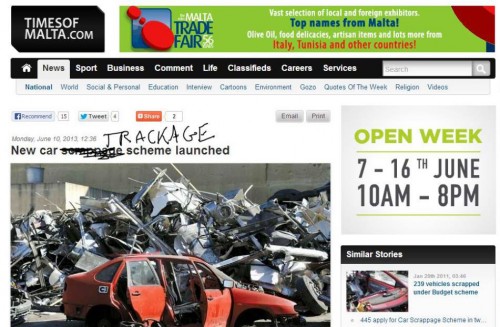 When the group reached 200 people, some members suggested that we throw a party to celebrate this milestone but we didn’t act on this until February 2015. We didn’t want to simply throw another party which would be forgotten the day after – we wanted to do something different, something that stuck in peoples’ good memory forever.

This happened around the time that I got my flare for Maltese music back, after admittedly losing it due to a perceived lack of quality in local music productions and events. However after attending a good number of events around this time, I witnessed a lot of great talent and it became clear to me that Maltese alternative music had a huge amount of potential. I just felt that the Maltese music scene lacked the strong representation and backing it needs (and deserves) to truly get the Maltese sound out there.

In my view, Malta lacked:

From this point onward, I was determined to do something about it and started to outline TS’ vision and strategy for supporting local talent. I appreciate any type of music, as long as it is good, so I wanted to embed this into TS from the start, thus representing artists from a wide spectrum of genres. This, in my opinion, is the most beautiful thing TS delivers.

Needless to say, a lot of work needed to be done, not only because we had to build TS from the ground up but also to increase awareness and appreciation of Maltese music locally. This requires a cultural change, and that’s one of the hardest things to do. It was clear, however, that in order to showcase Maltese music in an international spotlight, we first needed to grow a strong following locally.

In order to do so we needed to build a strong brand which included a fresh logo, related artwork and other content – enter Graziella, an extremely talented graphic and video designer. I met Graziella Delceppo at a work event where we got talking about TS. She was intrigued by the concept and offered to help with graphic design (she too wasn’t too keen on the funny, yet ridiculous Facebook cover photo at the time). We met during our lunch break where we brainstormed ideas until we eventually came up with the logo as it is today. Moving forward, we printed TS stickers, t-shirts and other merchandise.

Our next major project was to shoot a series of interviews but soon realised that we needed an additional pair of hands – enter Rachel Fenech, the team’s talented designer, videographer and peace keeper J. Graziella knew Rachel from art and design school and felt that she had the right skills and passion to be part of TS. We set up our first meeting together and clicked straight away – within a couple of weeks we filmed our first round of interviews, uploaded them to YouTube and got hundreds views within a couple of days.

From there onwards, it was pedal to the metal – in addition to the Facebook group, we set up a Facebook Page, Instagram account and Twitter page and started releasing daily content across these media. Additionally we set up a SoundCloud account where we release weekly podcasts showcasing local electronic music. Within a few months, we had over 6K plays but something messed up with our account (Soundcloud don’t want to admit they screwed up) and we lost all statistics. We quickly fixed that and we’re back on track.

During this time, preparations for our first event, held on 5th July 2014 were also underway. This event turned out to be a blast of a success with more than 600 people attending. Needless to say, this great response was a confirmation that the concept of combining multiple genres worked and this highly motivated us to host another event, this time on 6th December 2014. This time round we went a little bit crazy and held a guitar exposition hosted by SunSounds as well as a small art exhibition hosted by Sean Camilleri.

To date, 2015 has also been extremely busy; we applied for funds from the Malta Arts Fund, and got rejected, twice. We were also invited to a couple of radio shows namely on Michael Bugeja’s ROCKNA and OneClubbing, a couple press releases, and were kindly featured in Patron Magazine’s 5th Issue: The Quality Issue where I was invited to DJ at their exquisite launch event held at St. Anne’s Square in Sliema. Moreover, we were approached by Hide+Seek, another alternative culture magazine, to help them throw a party to raise funds for printing, and we had a whale of a time.

Furthermore, a lot of our time and effort was put into the development of this website, the planning and coordination of Rooftop Live Sessions as well as our main summer event, held on 4th July 2015.

Through these projects we aim to continue:

But artists need their followers and TS serves as a platform that hosts the community of music enthusiasts. TS aims to keep its community well informed about the local music scene, current and upcoming artists as well as events. Through this new site, people can also benefit from a fresh and exciting experience specifically through the embedded music player which offers a playlist, similar to Spotify, but with the difference that it is localized and more personal (playlists are created from each members’ post in the group). This is something ground breaking for Malta.

To top all this, we will also be hosting the main area at the Malta Street Arts Festival which is guaranteed to be good fun! It’s been a fun, yet demanding journey so far but we feel we haven’t even started yet! There are many other projects we are working on but that will have to wait for another blog J. We hope that you like this new page and thank you for your ongoing support!