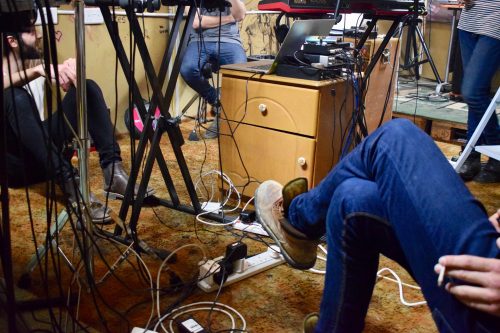 Once in a while you come across a band by accident which makes you stop in your tracks, turn to your friends and and go “Who are they?!” or, more relatabley, “Dawk Maltin?” Truth be told, that’s exactly what happened upon stumbling across CRUX’s live electronic set one balmy evening in July at last year’s Sliema Arts Festival. A chat to them afterwards confirmed that they were, in fact, Maltese. One of us bought their CD and we’d rave about how good they were on that night for the whole summer afterwards.

This year, just after it had been announced that Sliema Arts Festival was sadly not going ahead this summer, I was again taken aback when I saw the newly released video for NSKY – a vicey electronica banger of 80s proportions. With tunes like that and more under their belt off their critically acclaimed first album Ego vs Ego, it’s no wonder they’ve been chosen to support synthwave legends Alphaville at Beland Festival this summer!

I met up with CRUX at their practice room to find out more about these hooded men of mystery, and was transported to the depths of clubland via a garage space in Birkirkara as the bass flooded the egg-box lined laboratory…

Hey Crux! Pleased to meet you all! I first came across you guys at the Bay Stage supported by Trackage Scheme at last year’s Sliema Arts Festival, you were amazing. What are your thoughts on it not going ahead this year?

Karl- Its a shame. It’s a really, really big shame. I mean, we already don’t have many places to play…

Bertram- It’s a good platform it’s not just Maltese people that attend, even passers by… It’s a good reach and a good audience.

How are you gonna make up for it this year? Any plans?

Bertram- We’ve had some gigs, most recently The Warehouse Project in Zurrieq. It’s a really cool place and not many people know about it, basically the same organisers as Sliema Arts Fest…Rock the South also which was great, the crowd is there to listen and there are so many different styles of music…

Karl- People there are focusing on the music, they go there for the music and you can really feel the connection with the crowd.

Cool! It’s really good to see gigs and venues popping up all over Malta, in the South especially…

Karl- Then we have the Beland Festival coming up which happens every year in Zejtun.

You’re supporting Alphaville at Beland fest, that’s HUGE! You must be so excited.

Martin- Yes, we’re looking forward to playing on a big stage in front of a big crowd. Playing before Alphaville is obviously a big plus…

Do you get nervous when you’re going on stage or not so much since you don’t have the “traditional” band set up?

Martin- Because of all the wires…

Bertram- It gives me a buzz… 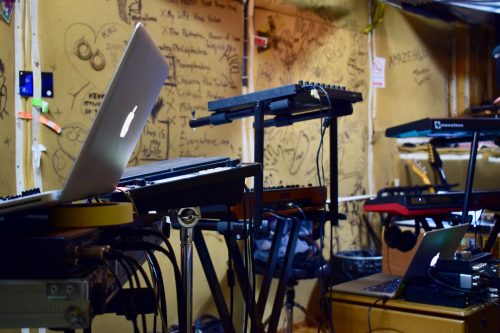 So you get wired? You’ve got this mysterious stage presence thing going on… Can you relieve some of the mystery of Crux and tell the readers something random that they might not know about you guys?

Karl- I love cats, but everyone knows that I think? I’m a cat freak.

Karl – Weird fact about Bertram – he only wears female jeans.

Oh dear haha..You’ve recently released a new video for NSKY, how has the response been for that?

Bert- There weren’t a lot of views but whoever saw it really liked it. It’s the first track from our from our first album, and we released it as a single online and on Youtube and Vevo.. It gets a good response when we play it live!

Everyone needs to see it! I bet. And you can still buy your album right?

Can you still buy the CDs?

Bertram – They just finished at Rock The South, in reality we have two left but we’re going to frame them…in case we get famous you know… then we can sell them for a million euros each and buy Egrant inc.

Haha! So can you see where the online albums went?

Karl- There’s a few people that bought them in Poland…I can check all the statistics from the distribution company that we’re enrolled with. Mainly Poland and there was a sale in Russia…

Karl- the countries that most click on our stuff are from Ukraine, Lithuania, Poland, Serbia…That’s plays and downloads…

So you’re big in Eastern Europe! What about gigging there?

Karl- Haha…We’re still experimenting so we want to get this new album done and then we’ll start touring!

Your songs with lyrics like ‘Tell Me’ are also fantastic but they’re mostly instrumental and electronic… I suppose electronic music is universal, I can see you guys going far, is that the plan?

Bertram- Our main aim is to play abroad you know? To make it kind of thing – for people to enjoy our music.

You’ve got this really good branding going on, like the name, the logo…What you wear on stage. Where do you get that stuff from?!

Bertram – Except for Bunce! He doesn’t listen to anyone.

Martin – He’s stubborn, he just bought his from Bershka…

Whoaaaa 18! Now that’s a good fun fact! How did you meet these guys then?

Bertram- The first time I met him he ate my sausage roll. I got pastizzi for everyone and he ate mine and I’m like – who’s this guy?

Bunce – I joined the band a year ago…

Bertram- Then we said fuck it we can’t get rid of you so start playing something!

Bunce – I was a fan of their first band – Bridget Bone – so I kinda knew who these guys were… I was a fan.

Karl – That’s why we bully him i think.

Awwww! So! The music video that’s been released for NSKY is next level good, how did it go down?

Bertram – Basically it’s been on plan for a long time. So we finally got round to it Sarah (Falzon), my girlfriend, illustrated the images and her cousin Malcolm (Ricci) animated the video.

Karl – All in the family!

It’s really, really great and so fitting to that 80s sound. Your merch is also super cool, you’ve got your marketing down!

Bertram – People buy it because you can wear it normally, it’s not like a “band cap”… And it suits everyone.

Haha. So I hear you’re working on new stuff! Awesome! What’s that going to be like?

Karl – We decided to go more electronic than Ego vs Ego. It’s evolving into a more synthish sound, even though I don’t want to say synthish because we use guitar as well. We’re trying to focus on the experience of the listener when he’s listening to us live.

Bertram – We’re trying to create a mood for the audience. The last album had a mixed mood, even the four singles we released were all quite different. You can easily say they’re from four different albums. I think that’s what we’re focusing on now, getting that identity down so the listener knows what to expect. 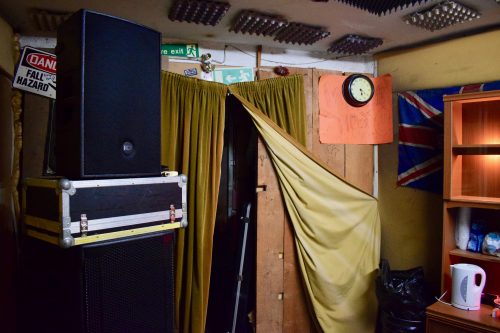 Some of the stuff on Ego vs Ego is a bit dark…Are we going to hear more of that?

Bert – Most of the new stuff is a bit dark

Karl – The sounds are a bit dark, not the mood. But thats the main direction.

When can we expect to hear the new album?

Bertram- We’re aiming by the end of the year. We’re writing our new stuff out of these idea snippets we had when we were performing our last album and now had the chance to see where they could go. They might even change after we’ve performed the new stuff live because we’re getting the feedback at the moment.

Karl – We’re in the middle of that part of the whole process.

So you’re kind of gauging the feel for your new work at the moment..

Bertram- Exactly. With this style we can change and adapt from gig to gig because we don’t have that verse/chorus structure so we can really change it up according to the mood. We’re more flexible in that sense. If you’re in a “normal” band you can’t really do that as such…

I see! So what’s the plan for Crux?

Karl – I think the plan is that we start to network, getting to know bands from all over the world. So, first the new album and then touring.

Bertram – We need to get our stuff out there; we need to play a lot.. No one’s just going to discover us without doing that. We’re always trying to reach the next step, slowly but surely. 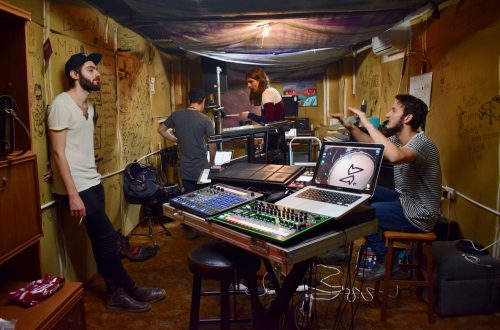 I can imagine… So much technology! One last thing- some difficult questions I wanted to ask you, and they get harder as you go along….let’s get down to The Crux of the Matter!

Bunce – They’re too comfortable. But only for rehersals or somewhere really chilled.

Martin – Did you know they really hate sweatpants in France?

Bert – So when we get big we’ll make our own sweatpants and they’ll go viral in France.

All – Chick King. For sure.

Bert – I’ll get two ricotta and one pizelli.

Hole in The Wall or Funky Monkey?

Martin – Depends on the mood. Funky because of the dog. We played a DJ set there for the “Smiling Man” video launch. Hole in The Wall is really nice. We should play there.

Bert – We could do a pop up DJ set there. A mini party…

Bunce – Gugar. The ftira is amazing. And the coconut balls. And they have really good fruit.

What ftira do you get?

Karl – Kraftwerk because of the last album of Daft Punk

All – Whoever legalises it.

Hahaha sweet! I’m happy with that, thanks guys! Stay forever young and we’ll see you at Beland Fest in July! xx 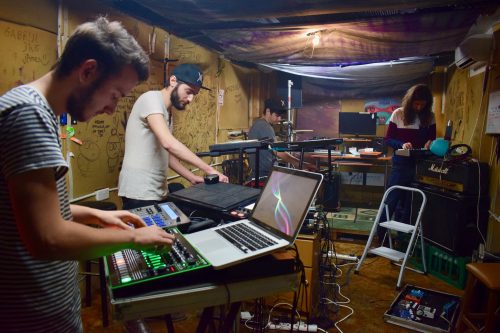 Tickets for Beland Music Festival on the July can be purchased here!