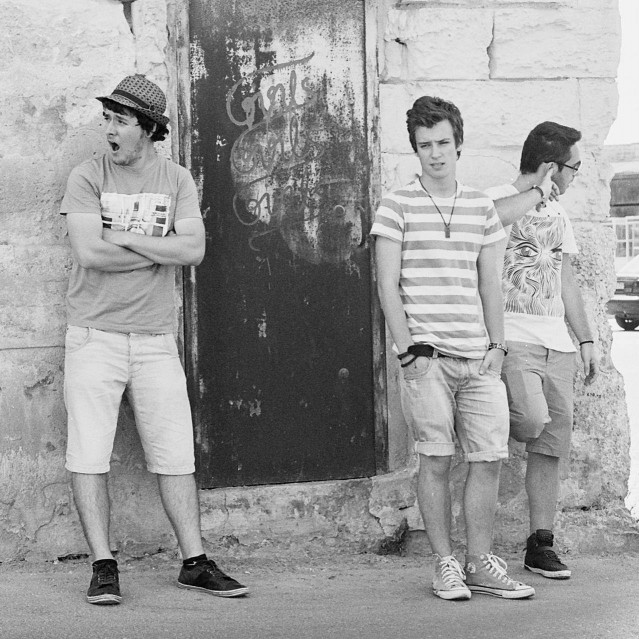 Dave, Kurt and Josh have been making music together as Three Stops to CHIN∆ since 2010. In that time they’ve gone from an eclectic mix of grunge and punk to a multi-layered, harmonic blend of dream-pop and shoegaze, while making it a point to not forget their energetic roots. Having released Take Me To The Beach during the summer of 2014, a homemade EP signalling this latest chapter in their sonic evolution, hints of what lies next are already looming over the horizon.  Additionally, with the ushering in of this new era, the trio simply refer to themselves as China, in itself a representation of a newfound, relatively minimalist image and sound which still echoes all their past endeavours and accomplishments together.  As the third bout of  underground winter songwriting is underway, next in line for China seems to be a heavier focus on electronic beats and sounds, with synths and 808 samples sometimes replacing guitars and acoustic drum sounds, exposing  a dreamier and at times more ambient and dark side to the band’s previous releases.

The trio has had its fair share of gig opportunities around their home island, and have played with pretty much all the major alternative bands in Malta (some of which were either personally chosen as support for their EP launches, or vice versa, including Cable35, Dolls for Idols, Errormantics, Hey Sus, Clandestines and The Violent Violets).  Moreover, as far as foreign bands go, they have played with bands from the likes of Dutch Jaya the Cat to Italian AIM (with whom they’ve shared the bill during two separate music festivals).  Malta only has a couple of national-scale events via which to showcase bands, such as the Farsons’ Great Beer Festival, Rock the South Festival and Notte Bianca in Valletta, and the band has played at these festivals a couple of times each.  In their debut year, back in their punkier / grungier days, their first two singles (and their two consequent music videos) got them nominated for the Malta Music Awards’ Best Music Video, Best Image, and Best Newcomers, a nomination that was doubled that same year in the Bay Music Awards, hosted by Malta’s Number 1 radio station.  One year later, after having released their debut EP “Rite” (which was the climax of their grunge phase), they were nominated for the Best Maltese Band award.  A couple of years down the line, radio-friendly singles with catchy choruses are at the bottom of their priority list, and they are now focusing on a more honest and intimate image and sound.