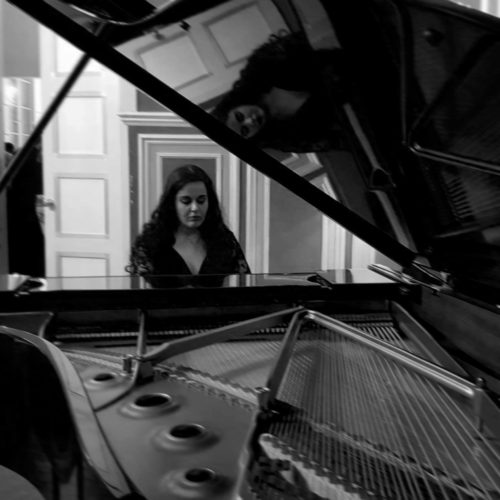 Maria-Elena Farrugia first started learning the piano at the age of 5 with Antoinette Borg and then continued her studies at the Fransina Abela Brincat Piano School with Maki Yagi, Gergely Nemeth and later, Ingrid Calleja Gruppetta.

In the last 12 years Maria-Elena has been very active in her local musical scene back in Malta, participating in a number of competitions and concerts, including several Lunchtime Concerts at St. James Cavalier as well as performing in the Victoria International Arts Festival.  As a result of obtaining high honors in her ABRSM exams and obtaining the Board Prize in Grade 8, in 2003 she was invited to play at the ABRSM Centenary Gala Concert held at Sala Isouard, Manoel Theatre. She also engaged in Masterclasses organized by the Malta International Arts Festival where she was tutored by internationally acclaimed pianists and professors Yuri Didenko, Vassily Scherbakov, Arkady Zenziper, Christoph Traxler and Alexander Zolotarev.


Maria-Elena has also been successful in a number of national and international competitions.  In 2003, she won the EPTA (Malta) Competition which enabled her to attend lessons at the Liszt Academy in Budapest with one of the jury, Profs. Balazs Szokolay.  The following year, she won 1st prize at the 12th Gianluca Campochiaro Competition (Pedara, Sicily). She also took part in the 6th Young Musicians Contest of the Malta Society of Arts, Manufacturing and Commerce where she placed 1st in her category.  In 2011 she was 1st prize winner of the Bice Mizzi Vassallo Music Competition (Malta) which gave her the opportunity of a week of Masterclasses held at the Royal Northern College of Music in Manchester, tutored by acclaimed pianist, Norma Fisher. In 2013, she graduated with first class honours in B.A. (Hons.) Music Studies, during which she was taught by Prof. Michael Laus for her solo pianoforte studies.


Following her Bachelor’s degree, she obtained her PGCE in music at the University of Malta. In 2014, her studies in pianoforte continued at the Royal Northern College of Music where she studied with Sally Ann MacLeod, as well as other visiting professors such as Michel Beroff, Philippe Cassard, Harvey Davies, Stefano Fiuzzi, Kathryn Stott and Hui-Ying Liu-Tawaststjerna, amongst others. It is here where Maria-Elena expanded her horizons by performing around Manchester, both as a soloist and with several duo and chamber ensembles; one of the most notable groups being Philetas Piano Trio.


In 2016, Maria-Elena graduated from her Master’s degree in Pianoforte studies at the RNCM, and is currently an active pianist, accompanist and teacher around Malta & Gozo. Moreover, she is a session-musician featuring with bands like ‘The Tailors’ (Malta).