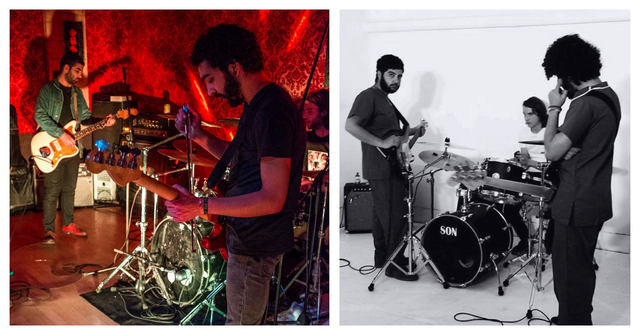 Local post-punk band The Violent Violets are launching their compelling album ‘Jade’ on the 14th of December (tomorrow). Trackage Scheme caught up with drummer Samuel Xiberras ahead of their much-anticipated release.

We noticed that your momentum has been building up lately. What can you tell us about it?

We stopped gigging live as we wanted to focus on working on material that is good enough and are proud of. We were more productive than some people might think and we probably have material for another two albums that will probably never see the light of day. We wanted to have a body of work that described us now, as much as TAME represented us at that time.

How would you describe the musical evolution of the band leading up to ‘Jade’?

We experimented with everything: new forms of songwriting, jamming, and even pushing ourselves out of our comfort zones and switching instruments. We set up rules regarding how we were going to work, and during the process itself, we decided to remove things that we had already done. Overall, we shifted that energy into something that’s meaningful to us.

Are there any particular themes that inspired the writing process?

There are too many themes…mostly the same as before. Lust, love, anger, friendship, partying, death and love lost…looking at them differently while exploring new terrain.

What can the audience expect from your upcoming album launch at the British Legion?

It is a group of friends doing what they enjoy the most. Accompanied by other artists that we respect, admire and love. Sam Christie will set the tone of the evening.

We have a couple of ideas we would like to carry out, but it might take some time. We might gig more, or we might stay in the shadows for a little longer, but yes we want to take our music to new places and test the waters. All in due time.